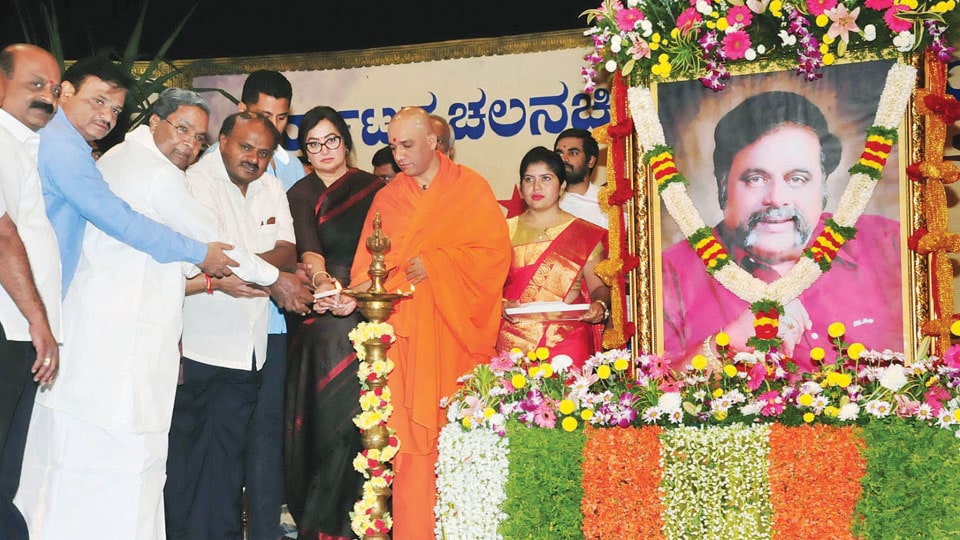 Bengaluru: It is final. The much sought-after Film City, which was granted to Mysuru by former CM Siddharamaiah, will not be shifted to Ramanagaram. It will remain in Mysuru as the place has over 250 scenic locations to shoot a movie.

This announcement was made by Chief Minister H.D. Kumaraswamy in Bengaluru this morning at an event held to pay tribute to matinee idol “Rebel Star” Ambarish, who passed away on Nov.24. The event “ Ambige Namana” was organised at Ambedkar Bhavan in Bengaluru by Karnataka Film Chamber of Commerce.

Before Kumaraswamy spoke, Siddharamaiah, who was also present at the meeting, urged the CM to name the Film City after Ambarish. “We have lost Ambarish and it is an unbearable loss for the film fraternity. He stood like a rock whenever the film industry was in crisis and he mediated in all tricky situations. To recognise his contributions, we must name the Film City in Mysuru after Ambarish as a befitting tribute,” Siddharamaiah said.

The former CM also said that it was Ambarish’s wish too to establish Film City in Mysuru. “We have provided land for the Film City at Himmavu, near Mysuru which falls under Varuna Constituency but now we are hearing reports that the Film City will be shifted to Ramanagaram, the constituency represented by CM Kumaraswamy, as announced in this year’s Budget. I appeal to Kumaraswamy to retain the mega project in Mysuru itself,” Siddharamaiah said.

Responding to the demand made by his coalition partner, Kumaraswamy said that the Film City will remain in Mysuru. “It is not possible to ignore Siddharamaiah’s words. We will build a Film University in Ramanagaram and retain Film City at Himmavu and will name them after Ambarish and Dr. Rajkumar,” he said.

Himmavu is near Mysuru and comes under Varuna Constituency that was represented by Siddharamaiah for two terms and now by his son Dr. Yathindra Siddharamaiah. The picturesque place was identified for the establishment of the Film City earlier and 116-acre land for the project had been transferred to the Department of Tourism.

When the Film City project was announced in 2015 Budget by Siddharamaiah it was welcomed by all of Sandalwood. Many film-makers hoped it would be a morale-booster for Kannada cinema, which is coming up with fresh ideas and experiments by young directors. Also, Himmavu is a favoured spot for outdoor film shootings even today, thanks to the existence of many tourist destinations in and around the city.

Famous film-makers of Bollywood in the decades past had a strong liking for Mysuru for their productions. Be it the “showman of Hindi cinema” Raj Kapoor or visionary film-maker V. Shantharam, Mysuru was a favourite. Mysuru is best suited as it has around 250 tourist destinations within a 10 to 15-km radius of city, which also has an abundance of Palaces. Films such as the cult classic ‘Pakeezah’ were shot in Mysuru.