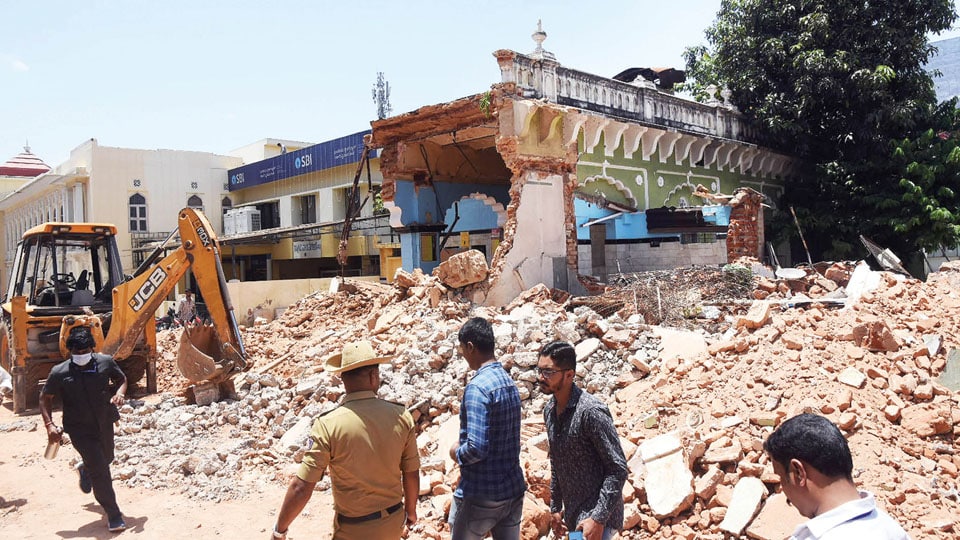 MLA, MCC Commissioner visit spot; road works to be completed in a couple of days

Mysore/Mysuru: After years of stalemate, the widening of Irwin Road began this morning and as the first stage of the works, the drain pipeline laying works have begun. Once the pipes are laid, they will be connected to the main drain line and later, the asphalting of the road will begin.

Irwin Road connects the Sub-Urban Bus Stand to the City Railway Station. The widened stretch will be a four-lane road and this is expected to ease traffic congestion to a large extent.

The widening works gained traction as the pending works between the Nehru Circle till Government Ayurveda College were taken up following the High Court of Karnataka vacating a stay. Following the Court order, stakeholders of the Jumma Masjid decided to make way for the road. A part of the Masjid, a wall and two minarets, are being demolished for the road to be widened.

The Wakf Board that manages the Jumma Masjid cleared belongings, paving way for a smooth demolition. The Guddali Puja to take up the road-widening work was performed way back in 2018 and the project was stuck in the land acquisition and compensation tangles till now. The ambitious project on one of the busiest roads — also narrow and very commercially developed — in Mysuru city was conceived in 2015.

In 2018, the MCC took up the development of two stretches of Irwin Road — the one between Babu Jagjivan Ram Circle (in front of the City Railway Station) and Ayurveda College Circle, and the one from Nehru Circle to the Sub-Urban Bus Stand (Arch Gate). But the stretch between Ayurveda College Circle and Nehru Circle was not widened due to land acquisition tangles. Of the pending works, a 60-metre drain has to be constructed and 70 metres have to be asphalted.

This morning, MLA L. Nagendra, Mysuru City Corporation (MCC) Commissioner G. Lakshmikantha Reddy, stakeholders of the Wakf Board, Corporators Jagadish, Nagaraj and Shivakumar visited the area along with the MCC Assistant Commissioners and supervised the works.

Nagendra said that the compensation of Rs. 3.46 crore has been paid by the MCC to the Wakf Board and the road was measured for demolition on Aug. 13. “There were 85 properties on the road and all of them have got compensation and the hurdles have been removed,” he said.

Earthmovers will clear the debris and the works on laying the underground drainage have already begun. “We will ensure that the works will be completed in a couple of days and once done, the main bottleneck on the road will be cleared,” he said. Today, the MCC workers also restored a damaged water pipeline that supplied drinking water to Halladakeri.

16 COMMENTS ON THIS POST To “Finally, Irwin Road widening begins”