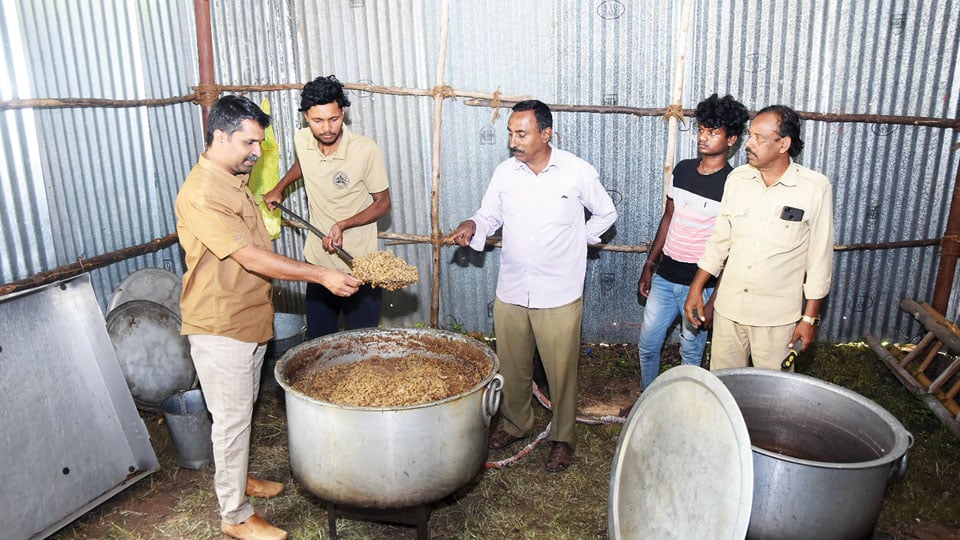 Mysore/Mysuru: All the nine Dasara elephants, including the Golden Howdah-carrying Abhimanyu have been put on a special diet regime inside the Mysore Palace and are given special care to put on weight and build strength and endurance.

The jumbos are given nutritional food and additional supplements twice a day at 5.30 am and 5 pm, so that they can participate easily in the grand finale, Jumboo Savari, by walking a distance of about 4 kms from the Mysore Palace to the Torchlight Parade Grounds in Bannimantap.

The diet regime began yesterday and it consists of three components. The first is green fodder including edible green leaves, banyan tree leaves, sugarcane and grass. The second component is Kusure, a baked mixture of jaggery, coconut, straw and paddy and the third component is a protein-rich diet that comprises a mix of urad grain, green gram, wheat, parboiled rice, butter and a mixture of beetroot, carrot, radish and cucumber with cooked onions. The mix is rolled into eight to 10 balls and is fed.

Food preparation starts early when the items are cooked for about two-and-a-half hours and left to cool down for about an hour. The time, duration and quantity are decided by Veterinarian Dr. Mujeeb, depending on the age and gender of the elephants. A separate shed has been constructed to cook food for these elephants.

“As of now, four kilograms of food are being given daily to each elephant and the quantity will be increased gradually,” Deputy Conservator of Forests (Wildlife) Dr. V. Karikalan told Star of Mysore this morning. Usually, 15 to 25 kg of nutritious food is given to all elephants and only Abhimanyu, the team captain, is given 25 to 30 kg of nutritious food per meal.

Nearly 80 percent of an elephant’s day is spent feeding. They eat roughly 10 percent of their body weight in food every day. The special is accompanied by a fitness regime where elephants are taken for walks from the Palace to Bannimantap.

An integral part of the food regime is an examination of elephant dung as it tells veterinarians about their health. The dung is inspected to see if the food is digested well or if there are any worms or insects in its stomach or if the elephant is suffering from stomach ailments. The dung of all elephants is examined closely both in the morning and evening and medicines are fed accordingly, Dr. Karikalan added.