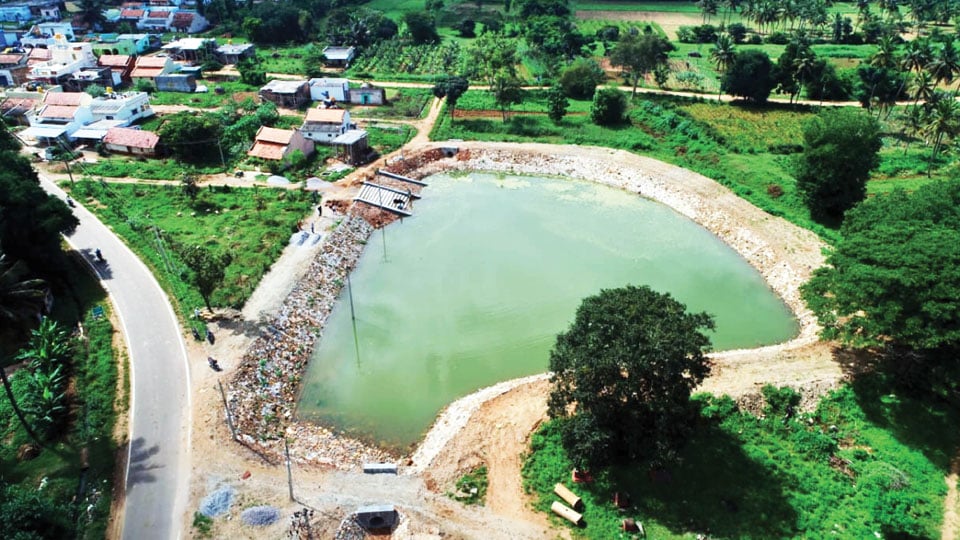 National Flag hoisted on the banks of 19 lakes; four elders felicitated from each village

Mysore/Mysuru: In line with the Amrit Sarovar project launched by Prime Minister Narendra Modi on Apr. 24 this year to develop and rejuvenate 75 water bodies in each district of the country as a part of the celebration of Azadi Ka Amrit Mahotsav, the Mysuru Zilla Panchayat (ZP) has rejuvenated 19 lakes in Mysuru district and yesterday, the National Tricolour was hoisted at all the 19 lakes.

ZP Chief Executive Officer (CEO) B.R. Poornima told Star of Mysore this morning that the State Government had set a target of rejuvenating 79 lakes within the Mysuru city and district and 15 lakes had to be developed by Aug. 15. “We have rejuvenated and developed 19 lakes so far and they have been given a new lease of life and beautified within a short span of just over three months. The rejuvenation of the remaining lakes will also be taken up in the due course and the target will be achieved,” she said.

People’s participation in the Mission is the focal point. Local freedom fighters, their family members, Martyr’s family members, Padma Awardee and citizens of the local area wherein an Amrit Sarovar is to be constructed, have to be engaged at all stages, says the Mission statement.

As part of Azadi Ka Amrit Mahotsav, events were held on the banks of all the 19 lakes where the National Flag was hoisted. “As mentioned in the Mission, our officers who are in charge of the lakes felicitated four senior citizens from each village and the villagers were requested to protect the water bodies,” Poornima added.

The Mission Amrit Sarovar is to be completed by 15th August 2023. Around 50,000 such Amrit Sarovars will be rejuvenated in the country and each of these Amrit Sarovar will have an approximate area of 1 acre with a water holding capacity of 10,000 cubic metres.

The ZP took up the lake rejuvenation works in the last week of March on a war-footing and the torrential rains did not hamper the works. “We desilted the lakes, developed tank bunds and modernised connected canals. Workers also cleared weeds and cleaned up the channels that bring water to the lakes. All the works were taken up under the MNREGA project and we also cleared encroachments and marked the lake boundaries,” ZP Deputy Secretary M. Krishnaraju said.

2 COMMENTS ON THIS POST To “Amrit Sarovar Project for Azadi ka Amrit Mahotsav: 19 lakes in Mysuru get a new lease of life”