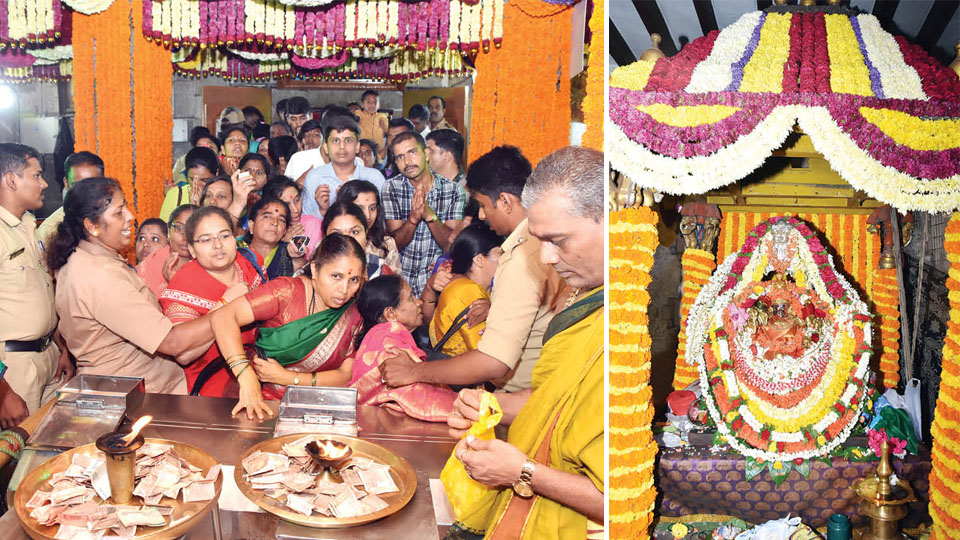 Mysuru: Amidst a light drizzle, thousands of devotees from city and elsewhere thronged the Chamundeshwari temple atop Chamundi Hill right from the wee hours of today, to have darshan of the deity on the First Ashada Friday. The rituals began as early as 3.30 am with Mahanyasa Abhisheka, Rudrabhisheka, Panchamruthabhisheka, Pushparchane and other rituals conducted by Temple Chief Priest Dr. N. Shashisekhar Dikshit, Priest Devi Prasad and other priests.

After the completion of the special rituals, in which scion of the erstwhile Mysore Royal family Yaduveer Krishnadatta Chamaraja Wadiyar took part, the doors of the temple were opened for the devotees at about 5.30 am, by which time, there were serpentine zig-zag queues, with devotees waiting patiently for their turn to have a darshan of Goddess Chamundeshwari on this auspicious day.

District Minister G.T. Devegowda, actor Darshan, MLA S.A. Ramdas were among the many personalities who offered puja at the temple.

The steps leading to the Hill Temple too was crowded today, as thousands of devotees, especially women, children and youths, mostly college students, opted to have darshan of the deity by climbing the Hill steps.

A large posse of Policemen were deployed along the steps to ensure safety and security of the devotees. Also, many sweepers were seen regularly cleaning the steps of vermilion and other articles at several points.

All private vehicles were banned atop the Hill today. The devotees had to take KSRTC buses that were operated for free from the makeshift bus stand at Lalitha Mahal Helipad at the foothills. The KSRTC has deployed 25 buses to ferry the devotees to the Hill. The temple and the sanctum sanctorum of the temple was specially decorated with variety of flowers.

READ ALSO  Ashada Friday: No decision yet on handling crowds at Hill Temple

Barricades were erected around the temple to regulate the free flow of devotees. Apart from dharma darshana, there were special entry tickets priced at Rs. 300 and Rs. 500 (inclusive of Abhisheka).

Prasada was distributed to the devotees at Dasoha Bhavan for which too, there was a long queue. The Prasada included rice bath, kesari bath, curd rice and ladoo. The distribution of prasada was allowed only after a check by health authorities.

Even as the distribution was going on, public announcements were made asking the devotees not to waste food and to throw the paper plates only in the dustbins placed all around the Dasoha Bhavan.

Police were seen making frequent announcements asking devotees to be beware of chain-snatchers and pick-pockets. With thousands of devotees descending on the Hill Temple, the District Administration had stationed ambulances and fire engines atop the Hill to meet any emergencies.

Namma Mysuru Foundation had installed a number of  dustbins atop the Hill.

Police had made elaborate security arrangements at the Hill and at the foothill near Lalitha Mahal Helipad, where devotees were required to take KSRTC buses to the Hill Temple.

The District Administration had made adequate parking facilities near the helipad, where 2,000 two-wheelers and nearly 1,000 four-wheelers and vans could be parked.

Even as the temple authorities made regular announcements asking the devotees to leave their footwear at the designated stand, a large number of devotees were seen leaving their footwear in front of the Dasoha Bhavan and near the footsteps atop the Hill, resulting in footwear piling up at these two points.