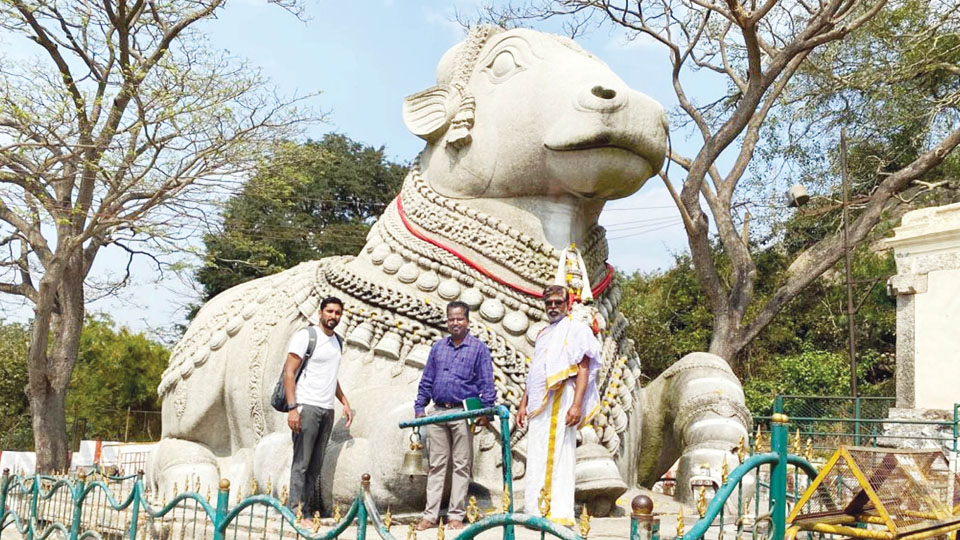 Fissures on Nandi Statue to be fixed with natural proces

Mysore/Mysuru: The monolith Nandi Statue atop the Chamundi Hill that has developed cracks due to vagaries of weather and improper cleaning processes using high-power water jets will be restored to its original black colour and works will begin in one-and-a-half months.

At present, the statue is white in colour after it was washed with high-power water jets in 2017. The fissures on the structure will be filled using a natural process and the task has been assigned by the Department of Archaeology and Museums to city sculptor Arun Yogiraj who had carved the 12-feet 3D statue of Adi Guru Shankaracharya in sitting posture at the Kedarnath Temple in Rudraprayag district of Uttarakhand. This apart, he has carved many other artistic statues with great visual appeal.

The statue of Nandi, the celestial bull, rests midway along the road to Sri Chamundeshwari Temple and the monolithic statue is a major tourist attraction.

The statue, reckoned to be at least 350 years old, was sculpted during the period of Dodda Devaraja Wadiyar who ruled from 1659 to 1673 and is the only one of its kind in the State. The statue is 3,489 ft. above mean sea level.

Arun has already visited the Nandi Statue twice and has provided certain suggestions to the Department. If the statue was carved with black schist (Krishna Shile), it would not have developed fissures. But this Nandi has been carved with wild stones and fissures have surfaced after 300 to 400 years, he told Star of Mysore.

“I had inspected the statue earlier when Abhiram G. Sankar was the Mysuru Deputy Commissioner as he had entrusted the job to me and now, B.R. Poornima, Commissioner, Department of Archaeology and Museums has contacted me and has invited suggestions on restoring the fissures and for the overall conservation of the monolith. A scientific method will be used without any chemicals to fill the fissures,” he said.

READ ALSO  Back to the wild

The statue is an igneous rock (form when magma [molten rock] cools and crystallises) and is also called ‘Chamundi Grey Granite’.

“These rocks are largely available and usually pink and white with a mix of black. This type of rock is usually not used for sculpting as it will not support small sculptures. These rocks contain mica and are porous. The rock reacts when an Abhisheka (anointment) is performed and may cause a small amount of food poisoning if consumed,” he explained.

“During my inspection of the Nandi Statue, I saw that slight cracks have developed which has to be treated. High pressure water jets should not be used for cleaning as the process will harm the statue. We usually give oil treatment to stone sculptures to fill the pores. Abhishekas using oil, ghee and other items are also done to the statue of Gommateshwara in Shravanabelagola,” he said.

Holes have been observed at a few points of the statue and they are the result of vagaries of weather. “Coconut oil will be applied to the entire statue and dry copra will be burnt to form carbon powder to be applied to the statue. This will make the statue black and it will regain its original black colour. This is a time-tested method and even in the earlier ages, the statues are usually safeguarded using this method,” he added.

Archaeology Commissioner Poornima said that the fissures on the Nandi Statue and other related issues have been discussed with Sri Chamundeshwari Temple management. “They have volunteered to bear the expenses and sculptor Arun Yogiraj has been asked to prepare an estimate. His proposal will be sent for approval and the conservation works will begin after securing approval in one-and-a-half months,” she said.