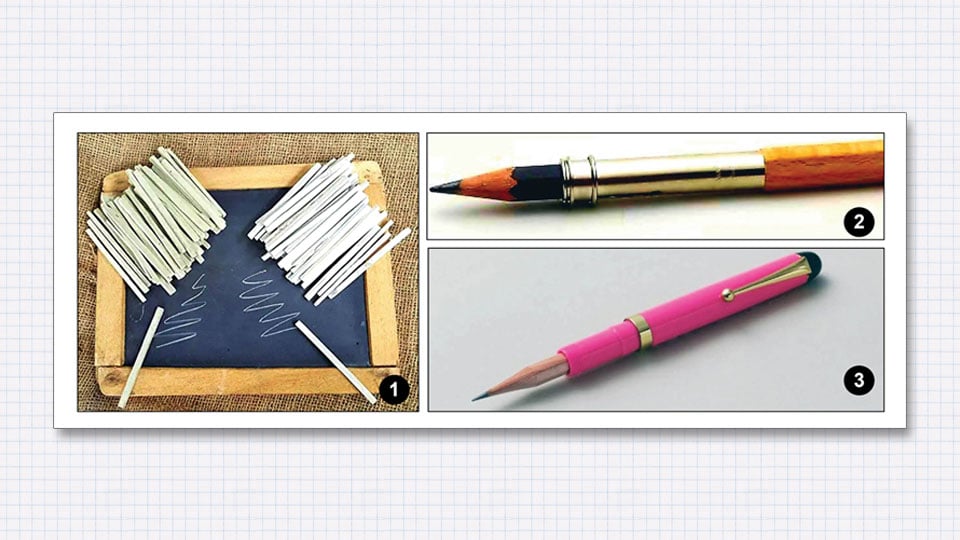 There is no denying the fact that wherever we are in this wide world, we all first learn to write only with a pencil. It is a different matter that the pencils we use may be of many different kinds depending on what we use them for. But essentially they are all the same and they have been the same over a pretty long time.

Just two or three simple components; a wooden body with a graphite lead inside, sometimes topped with an eraser at the non-writing end make one of the best writing tools known to mankind. Yes, that’s it; they are one of the simplest devices ever used by us over the centuries. But I did not start my first writing attempts with a pencil because something else preceded my love affair with it. That humble place was taken by the much humbler slate pencil which we all used in the nursery classes and which most present day youngsters may never have seen or even heard of.

And, I think my generation was clearly the last one to use it. It used to come in two forms. A slender hand ground dull grey shard of soft soap stone and a similar shaft moulded from chalk powder, often with a sprinkling of bright colour to cheer up sulking kids who refused to go to school! These pencils were extremely fragile and no less than a third of them would invariably arrive only in more than one piece even if they always came packed in cardboard boxes filled with soft sawdust.

As a schoolboy who just hated going to school I used to put the fragility of these pencils to good use every now and then. I used to always start my journey to school with a brand new one each day and then depending on my mood, deliberately but discreetly snap it on the way and burst into tears and tantrums that I would not go to school with a broken pencil !

Khader, the ever grinning boy whose job it was to escort me and sometimes even carry me to school on his shoulders would then have to coax and cajole me to relent, sometimes successfully but most often unsuccessfully. Which way we went from our unscheduled wayside stop depended entirely on how he fared in his attempts! Thankfully, because he himself had never gone to any school as a student, he used to be very sympathetic to my view that schooling was a real pain unworthy of being so cruelly inflicted on any child!

In my school we had a very kind hearted Kannada teacher, Miss Gundamma who used to go from classroom to classroom soon after the morning assembly with a tray of slate pencils from which we could pick one up for one paisa each if we had forgotten to bring one from home! The writing slates too during my time were just very fragile sheets of shale enclosed in a wooden frame not unlike a framed picture. They were so fragile that if you dropped one you’d be left with two or even three slates in one frame! Later day slates were made of more impact resistant tin sheets coated on either side with dull blackboard paint.

During my school days students would start writing with a pencil only from the first standard and with a pen only from the fifth when they entered what was called the Middle School phase. Because of this transition this used to be a very proud and much awaited moment. Coming back to the regular pencil, the reason why I am writing about it today is because this morning I received on my mobile phone a message from my close friend K. S. Gururaja, about how we should take seven lessons from the life of  an ordinary pencil.

It says that firstly we should all remember that our lives too are like a pencil which always needs a hand to guide it, thereby stressing upon the need for the hand of God to guide us.

Secondly we have to stop now and then to take stock of our lives like how we stop to sharpen a pencil. This may bring a little pain but it only makes us sharper and better.

The third thing to note is that whatever mistakes that a pencil makes can be easily erased and corrected. We too should do the same.  The fourth thing that we should remember is that in any pencil it is not the wooden exterior but the inner core that matters most. So is it with us and that is what we should pay attention to most.

The fifth thing we should remember is that whatever it touches, a pencil leaves a mark. Our own lives too do the same and we should therefore be careful about what impressions we leave behind in the hearts and minds of the people whom we interact with.

The sixth quality of a pencil is that it only gets shorter and shorter with use. So also are our own lives and therefore we should make the most of them.

Finally the pencil is useful right up to its very end which tells us all that we too should strive to be useful, helpful and productive right up to our dying day! But here some of you may like to differ and say that a pencil really cannot be used right up to its end simply because it cannot be held comfortably when it becomes too short!

But I would like to say that it need not be so. Every dying pencil can be given a slightly longer lease of life and we used to all do it in my schooldays! Yes as commonplace as pencils were then we also had pencil extenders in which even the most teeny weenie pencil could be held and used till its last breath! Incidentally, if you are curious to know what I’m talking about and are eager to own one of these extenders they are still available online. But as kids we used to all resort to all kinds of tricks like pushing the stub into an old and defunct fountain pen to make it longer and thus easier to hold.

And, just to show off to my friends I had devised my own rather unusual contraption from an empty brass cartridge case from my father’s .318 calibre Mauser rifle. It used to be the object of envy of all my friends, with each one of them offering me their long, new pencils in exchange just to be able to write with my unique writing instrument just for a little while.

And, although I had dozens of them lying at home, whenever any one of my friends would ask me to give them one such empty cartridge case I would tell them very gravely that it was against the law to possess one unless someone in their family possessed a licenced rifle!

Incidentally, innovative as I was, I had one other very unusual and amusing use for this very same cartridge case. I had this habit of often bolting myself inside my room every time I felt like skipping school and coming out only after it was long past school going time. When this practice became all too frequent my uncle Prof. M. J. Sadiq one day removed the horizontal tower bolt from the door to deter me. Not to be outdone I would then use my dear cartridge case to do the job of the bolt and keep me safely away from school! Now you can understand why I am so fond of guns!

I have been noticing that ever since the COVID-19 pandemic started, our District Administration authorities have necessarily been holding many meetings in a desperate bid to discuss ways and means of getting it under control. This is true across the length and breadth of the entire country too.

As a doctor even I keep participating in a good many of these meetings. But what I have noticed is that most of these meetings are always held in closed halls with just an apology for what can be called good ventilation just for the consolation of all those who have to attend these meetings out of sheer necessity.

Even where there are vast open spaces like huge compounds, courtyards or corridors they are somehow always held inside these closed halls which is an extremely unwise and dangerous thing to do considering the unusually high infectivity of the COVID-19 virus.

This clearly is the reason why many Government officers from almost all Departments including some of our high ranking Administrative Officers too have been getting infected with disturbing regularity. Many of them have gone through much misery and morbidity with some very debilitating and long lasting side effects. This rather dangerous trend is completely avoidable with a little common sense driven precautions.

After one such meeting recently in a closed meeting hall at our sprawling Palace complex which has wide sheltered corridors and acres and acres of open spaces with huge shade trees I could not help pointing out to our former Deputy Commissioner that he would be doing a great service if he ensured that all meetings are held only in open places, a suggestion to which he readily agreed.

I only hope this becomes the order of the day paving way for some very safe traditions and protocols.

3 COMMENTS ON THIS POST To “Fit India Freedom Run Drive”