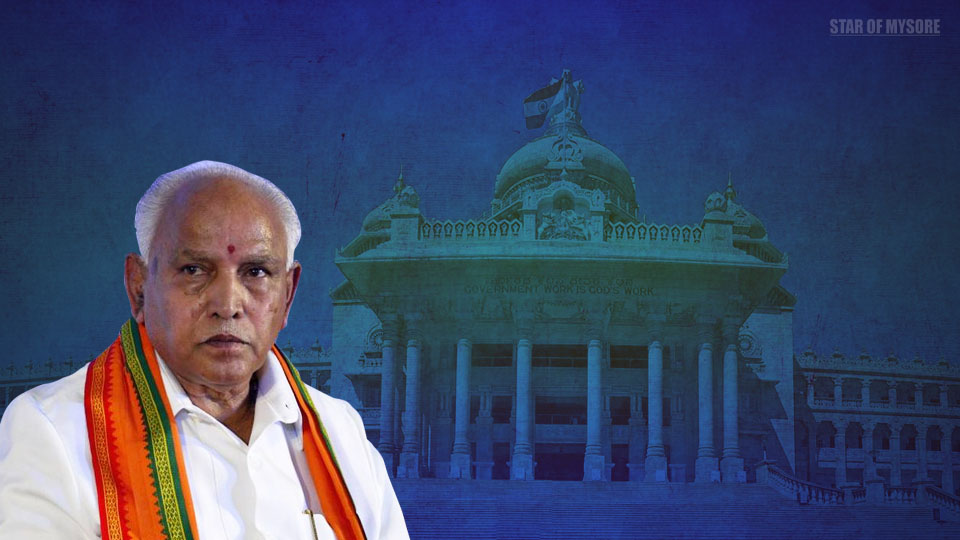 New Delhi: The Supreme Court this morning ordered that a floor test be conducted at 4 pm tomorrow (May 19) to determine whether the day-old B.S. Yeddyurappa government in Karnataka has the support of the required number of MLAs to continue in the government. The BJP is 8-member short of the 112-majority mark and it has to rack up the numbers.

The SC Bench comprising Justices A.K. Sikri, S.A. Bobde and Ashok Bhushan heard a petition filed by the Congress-JD(S) combine against the decision of Karnataka Governor Vajubhai Rudabhai Vala to invite the BJP to form the government in the State.

The Bench also restrained Yeddyurappa from taking any major policy decisions till after the floor test. It further restrained the new Karnataka government from nominating any Anglo-Indian member to the House till it proves its majority. The Bench said all MLAs will vote tomorrow. Pro-tem Speaker will decide in what manner the floor test should be held.

The Apex Court yesterday had given Attorney General K.K. Venugopal 48 hours to produce the two letters written to the Governor by Yeddyurappa. The top law officer had to procure the documents from the Governor and produce them at  10.30 am today.

While the Congress and the JD(S) welcomed the SC order, Yeddyurappa’s counsel Mukul Rohatgi urged the Bench to reconsider saying it was too soon. Earlier, Venugopal asked the Bench if it would consider secret ballots, but the Bench rejected the suggestion. However, in the final judgement, the Bench said that the

Pro-tem Speaker will decide what manner the floor test should be held.

Yeddyurappa was administered the oath of office by Governor Vajubhai Vala yesterday morning, hours after the SC heard a plea by post-poll allies Congress-JD(S) challenging Vala’s decision to invite the BJP to form the government.

As the Court assembled, Rohatgi handed over Yeddyurappa’s letter to the Governor to the three judges. He told the Bench that Yeddyurappa has been elected as the leader of the largest party (BJP) and that he has the required support of the MLAs and is also ready to prove it on the floor of the House.

During the hearing, Justice A.K. Sikri said, “On one hand, there is a party which has given names and on the other, there is a party which simply claims it has the support. How do we decide? As per the Sarkaria Commission, the largest party should be invited to form the government. If that’s not possible, pre-poll alliance is highest as people would have known them coming together.”

The Judge added, “There are two options: Either we hear the matter in full and decide, or we call for a floor test tomorrow. Ultimately, it has to be tested on the floor of the House.”

Advocate Abhishek Manu Singhvi said, “The question is, is it fair to call those with lesser numbers?” To this, Justice S.A. Bobde replied, “Whoever may be called, the decision is that of the House.” “Yeddyurappa’s letter claiming support was even before the results were out,” Singhvi told the Bench.

In case of a floor test, Singhvi sought proper security for Congress and JD(S) MLAs, to which the top Court said that it can pass an order to make necessary security arrangements.

At this point, Rohatgi told the Bench, “Need reasonable time. (Floor test) should not be tomorrow. I am disputing the signatures of Congress members. Floor test will show how many signatures they really had. Governor never received a signed letter.”

He also said “I don’t think floor test should be held tomorrow. Pro-tem Speaker has to be appointed, etc. People should be given a reasonable time. Not tomorrow. Not fair. I have to also get my flock. Their people are locked up, not mine.”

To this, Justice Sikri replied, “Sorry, can’t compromise on that.”

In Bengaluru, Chief Minister B.S. Yeddyurappa told reporters that he was ready to prove majority. “We will prove the majority on the floor of the House tomorrow. Will discuss with Chief Secretary and call for Assembly Session tomorrow,” Yeddyurappa added.

BJP leader Shobha Karandlaje said, “We welcome the Supreme Court’s order. We are ready for the floor test and will prove the majority tomorrow.” Union Minister Prakash Javadekar said, “BJP is ready and confident of winning trust vote. We will prove our majority on the floor of the House.”