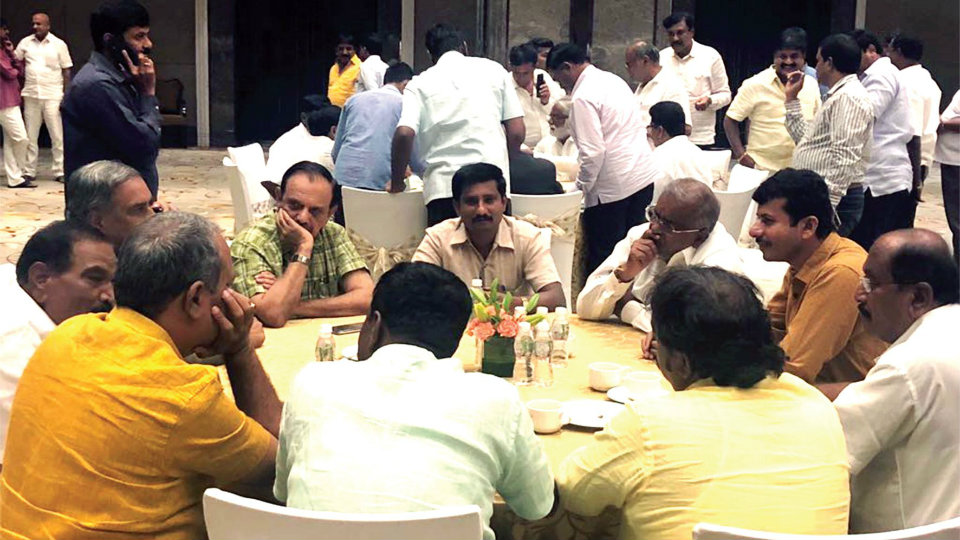 MLA G.T. Devegowda in discussion with other MLAs at a resort in Hyderabad this morning.

Bengaluru / Hyderabad:  The scene of the Karnataka political drama was shifted to Hyderabad with the arrival of the newly-elected Congress and JD(S) MLAs this morning just as the Supreme Court ordered a floor test for the B.S. Yeddyurappa-led BJP government tomorrow at 4 pm.

Fearing poaching by the BJP, two buses started from Bengaluru around 12:15 midnight on Thursday and zoomed down the Bengaluru-Hyderabad Highway in scenes straight out of a thriller. The buses were closely followed by cars and SUVs that had bouncers and private                security guards.

The hide-and-seek started shortly after BJP’s B.S. Yeddyurappa was sworn in as CM, an abbreviated ceremony that followed a night-long Supreme Court hearing in which judges allowed the oath ceremony.

After one hour of journey, some of the lawmakers shifted to a third bus, a sleeper, for a more comfortable ride. After an eight-hour journey, one of the buses drove into Hyderabad city and stopped at the Hyatt Regency. Another bus went to the Taj Krishna, where the hotel’s staff were seen trying to ensure that the media did not enter the lobby. One more bus carried the MLAs to Novotel Hotel and sources said that bus carried JD(S) MLAs.

To keep their lawmakers away from inducements, offers and threats from the BJP — as they allege — the Congress and JD(S) had planned chartered flights out of Bengaluru. Around 11:30 pm, however, the flights were cancelled. “We didn’t get permission. The airline operators refused,” said Congress leader D.K. Shivakumar, who organised the bus trip to Hyderabad.

About an hour later, the buses drove out of Eagleton, a private resort in Bengaluru where the Congress lawmakers had been put up, and Shangri-La, a luxury hotel where the JD(S) legislators had been staying.

Around 1:30 am, the sleeper bus joined the little convoy. Water, blankets, food were arranged on the fly. A journey of 500 kilometres took eight hours.

Around 5 am, as the lawmakers stopped for a tea or coffee break about 80 km from Hyderabad. The MLAs arrived in three buses of SRS Travels and Orange Travels.