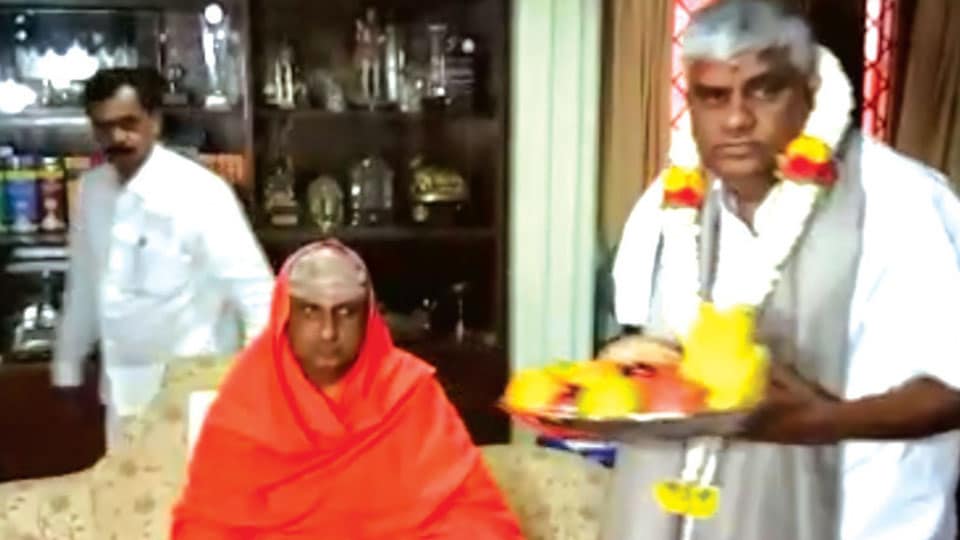 State will be free of National parties after 2018 polls: H.D. Revanna

Mysuru:  Former Minister and senior JD(S) leader H.D. Revanna, son of JD(S) Supremo and former Prime Minister H.D. Deve Gowda, has said that the State will be free of National parties  after the upcoming Assembly polls.

Speaking to press persons after meeting Suttur Seer Sri Shivarathri Deshikendra Swamiji in the Mutt premises at the foot of Chamundi Hill here yesterday, Revanna said the JD(S) was sure of coming to power on its own in the May. 12 Assembly polls.

Dismissing Congress allegations that the JD(S) had reached a secret understanding with the BJP, he said that the people were eager to vote the JD(S) to power.

Maintaining that the people of State still remember the good work done by H.D. Kumaraswamy during the 20 month JD(S) – BJP coalition Government, Revanna lashed out at the Congress Government for doing little for the people of Hassan.

Referring to H.D. Deve Gowda’s claim that the political climate will charge after Prime Minister Narendra Modi’s campaign in the State, the JD(S) leader said that both the National parties – the Congress and the BJP, were targeting JD(S) and the JD(S) would surely benefit from the mud-slinging between Congress and BJP.

He further said that the JD(S) does not need any sort of help from Prime Minister Narendra Modi.

Revanna, who is contesting from Holenarasipur, launched a tirade against Congress candidate B.P. Manjegowda, alleging that Manjegowda had amassed huge wealth and was using ill-gotten money in the polls.

ONE COMMENT ON THIS POST To “State will be free of National parties after 2018 polls: H.D. Revanna”