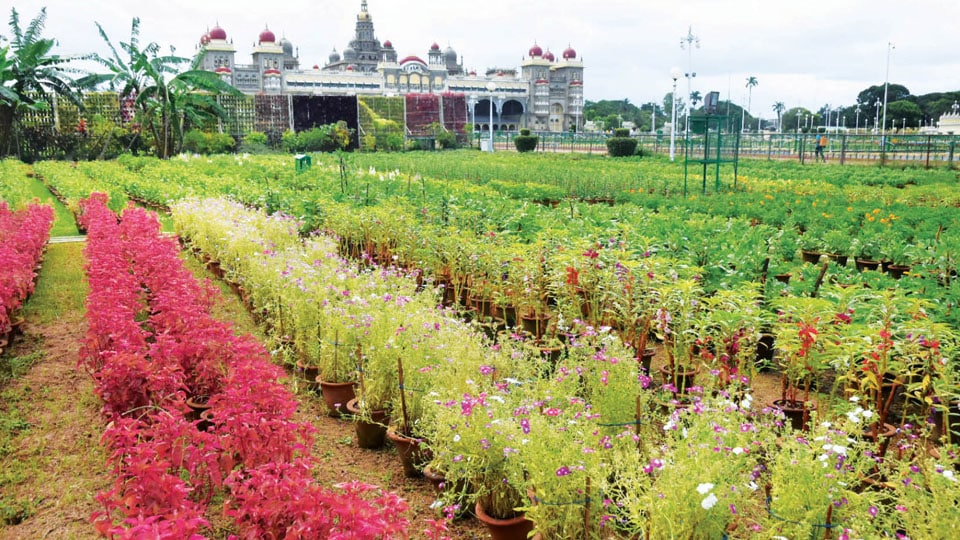 Floral replica of Red Fort at Palace this Dasara

Mysore/Mysuru: The annual Dasara Flower Show at the Mysore Palace will be the ‘show-stopper’ of the 10-day festival and is all set to compete with the main Flower Show at Kuppanna Park, organised by the Horticulture Department.

The Mysore Palace Board has planned the Flower Show to be a bigger and better event this time around and has plans to enhance the beauty of the Palace with flowers and floral arrangements, compelling the tourists to pay a visit to the venue.

The Board has planned it in such a way so as to give a bonus to whoever visits the Mysore Palace by making the Flower Show an entry-fee-free event. The main floral display theme of the Flower Show will be the replica of the historic Red Fort in New Delhi which will be 60 ft long, 10 ft wide and 28 ft high.

The Palace Dasara Flower Show will be inaugurated on Sept. 26 and the entry will be from 10 am to 8.30 pm. Over 15,000 saplings, ornamental plants, quick flowering plants like Felicia Daisy, Marigold, Zinnia and ornamental plants like Cactus will be on display. In all, there will be over 4 lakh flowers with 32 varieties, Mysore Palace Board Deputy Director T.S. Subramanya told Star of Mysore.

This apart, there will be floral displays of the portraits of former Chief of Defence Staff Gen. Bipin Rawat, Vir Chakra recipient Abhinandan Varthaman who, along with the Government of India, gave tense moments to Pakistan, Iron Man Sardar Vallabhbhai Patel (symbolising the unity of India), and models  of Kargil War.

A floral replica of the President of India Droupadi Murmu is in the offing. Also, the recent symbol of Atmanirbhar Bharat, INS Vikrant, an indigenously developed warship will be a prominent floral display.  As it is the 75th Independence year, the other prominent theme will be patriotism which will be conveyed  through flowers.

Fresh flowers all the way

“From the start to the finish of the Flower Show, care would be taken to ensure that the flowers, fruits and vegetables are fresh and a vertical garden will be set up at Varaha Gate Garden. Exotic species will be purchased and displayed here.

Also, 500 visitors will be given free saplings of Aloe Vera, Thulasi, Jasmine and Betel Leaf. As an added attraction, the classical instrumental music composed by Jayachamaraja Wadiyar will be played as viewers enter the Flower Show venue,” Subramanya explained.

As part of the Flower Show, a photo exhibition will be organised where the themes of Dasara then and now (Wadiyars rule) will be displayed so hat the public can get an idea of how grand Dasara was. The exhibition will also include an audio- visual element.

A Doll’s House: Homes usually ring in the Dasara festivities and Navarathri is filled with colourful doll displays. Visitors stream in and out of many of these homes to see the attractive tradition. To catch up with the trend, select seven members of the public have been invited to display their dolls in seven blocks as part of the Flower Show. They are, Jayashree Nagaprasad (Azadi Ka Amrit Mahotsav), Hemalatha Kumaraswamy (Devi Divyadarshan), H. Leelavathi (Human lifecycle), Meera Ramesh (Palace Durga Puja), Annapoorna Gopalakrishna (Vishnuleela), Krishna Bhat (Cultural Dasara Doll) and Geetha Srihari (Krishnaleela).