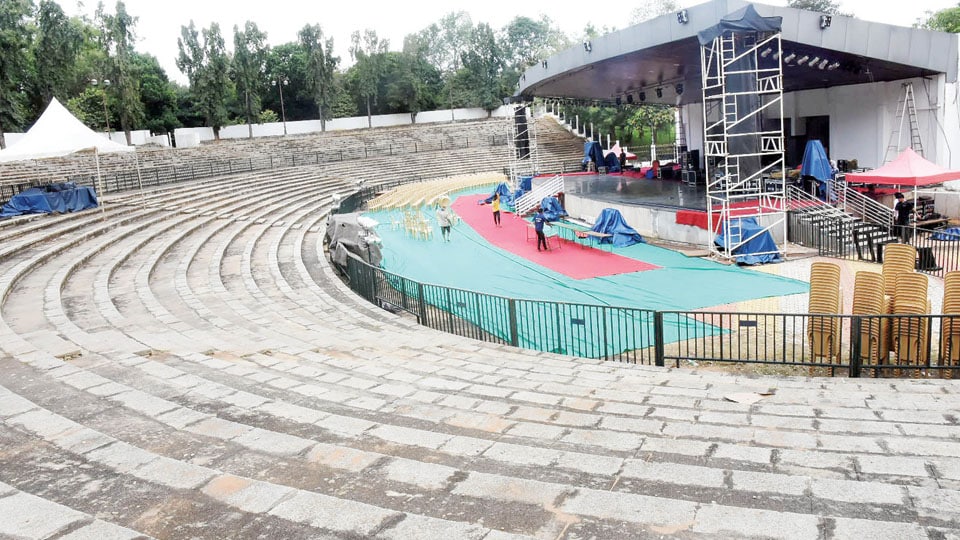 Mysore/Mysuru: ‘Yuva Sambhrama’, a special stage for the youngsters to showcase their talents, organised as part of grand Dasara will commence from tomorrow. The event will be held at Open Air Theatre in Manasagangothri from Sept. 16 to Sept. 24 between 5.30 pm and 10 pm.

Addressing media persons yesterday, Yuva Dasara Sub-Committee Special Officer and Superintendent of Police (SP) R. Chethan said that Actor ‘Dolly’ Dhananjay will be the special invitee during the inaugural programme tomorrow at 5.30 pm. District Minister S.T. Somashekar will inaugurate. MLA L. Nagendra will preside. Mayor Shivakumar will be the chief guest. MPs, MLAs and other people’s representatives will be present.

“Over 10,000 students from 253 colleges across the State including Mysuru, Kodagu, Chamarajanagar, Mandya, Hassan etc, will participate in Yuva Sambhrama. Ten specially-abled teams will also take part. Each team consisting of 30 to 40 members will be given 10 minutes to perform and 28 teams will perform daily,” he said.

The participants have been instructed to give performances based on the nine themes which include: ‘Azadi Ka Amrit Mahotsav’, ‘Karnataka’s contribution in Indian Independence Movement’, ‘Indian Independence Movement’, ‘National integration and conservation of heritage’, ‘Women Empowerment and Equality’, ‘Kannada and Culture, Folk Art’, ‘Environmental Conservation and Man-made disasters’, ‘Swachha Bharath-Swachha Karnataka, Health and Sanitation’ and  ‘Contribution of Mysore Maharajas in building Model Mysuru.’ Programmes will be scheduled in such a way that it will not affect specially-abled participants, he said.

The best 18 teams who have given extraordinary performances with unique concepts on the themes provided will be given an opportunity to perform at ‘Yuva Dasara’ where famous artistes from across the country will give cultural performances at Maharaja’s College Grounds.  Every day one team will be allowed to perform first which will be followed with the day’s scheduled programme. The list of Yuva Dasara artistes and programme schedule is yet to be finalised. District Minister will provide details about the same, SP Chethan said.

This year Yuva Sambhrama will see a huge crowd as it is held after a gap of two years due to COVID-19 pandemic.  In the last two years, cultural programmes were organised only at Mysore Palace stage. This year everyone is equally excited to witness a great talent show at Yuva Sambhrama. CCTV cameras will be installed at the venue to prevent any mischief and tight Police security will be deployed to ensure smooth conduct of the show, he added.