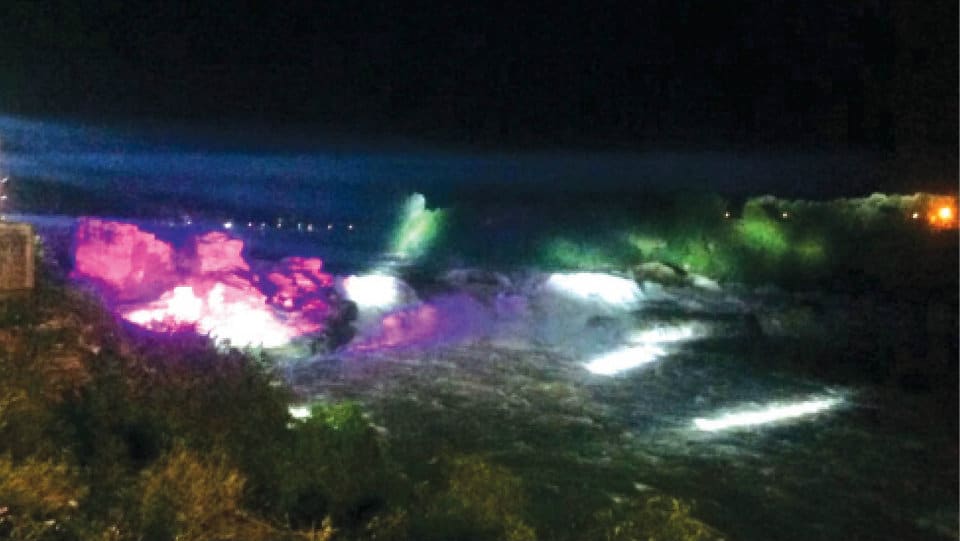 Flow of colours at Chunchanakatte Waterfalls

Chunchanakatte: Even as the flow of colours was a sight to behold at KRS Dam in Mandya and the water released dancing to different colours is still fresh in memory, a similar spectacle awaits the visitors to Chunchanakatte here, where all arrangements have been made for Chief Minister H.D. Kumaraswamy to inaugurate the two-day Jalapathotsava today at 7 pm.

The Jalapathotsava is being held today and tomorrow (Aug.11 and 12) and in view of tourist influx all facilities have been created for them to view the illuminated waterfall spectacle in all its glory.

The temple, the entrance arch, Basava Circle with the statue of the bull and Nalwadi Krishnaraja Wadiyar statue have all been given a fresh coat of paint. The roads leading to the waterfalls through the villages and special illuminated lights also greet the visitors to the spot.

The stage for the cultural programme and good cover for people to sit under is ready. The garbage, waste and weeds collected have all been cleared. The potholes on the main road leading to the temple have been covered for smooth flow of traffic. Drinking water and temporary toilet arrangements too are in place.

The Traffic Police have placed barricades on the roads to control traffic and parking arrangements for the tourist vehicles are ready.

Mysuru District Deputy Commissioner Abhiram G. Sankar along with the officials visited the spot last evening and supervised all the arrangements.

Assistant Commissioner Nikhitha, who is overseeing the preparations, said this year’s Jalapathotsava is going to be very different from the previous four years. In order to showcase the Chunchanakatte Jalapathotsava to the State and promote tourism, a grand spectacle awaits the tourists. Along with CM Kumaraswamy, his son Nikhil will be present. Actors Sudeep, Diganth, Aindrita Rai, Ragini, Prem, Music Director and Playback Singer Arjun Janya and comedian Chikkanna will light up the stage with their performances.

The other attractions include a fashion show, documentary and cultural programmes.

Kollegal (Chamarajanagar District) – The fourth Jalapathotsava, which was scheduled to be held at Bharachukki on Aug.18 and 19, has been postponed due to administrative reasons. Kollegal Sub-Division Assistant Commissioner B. Fouzia said that the dates for the celebration are yet to be confirmed.

Meanwhile, the Gaganachukki Jalapathotsava in Mandya scheduled to be held on Aug.25 and 26 will be held as announced.