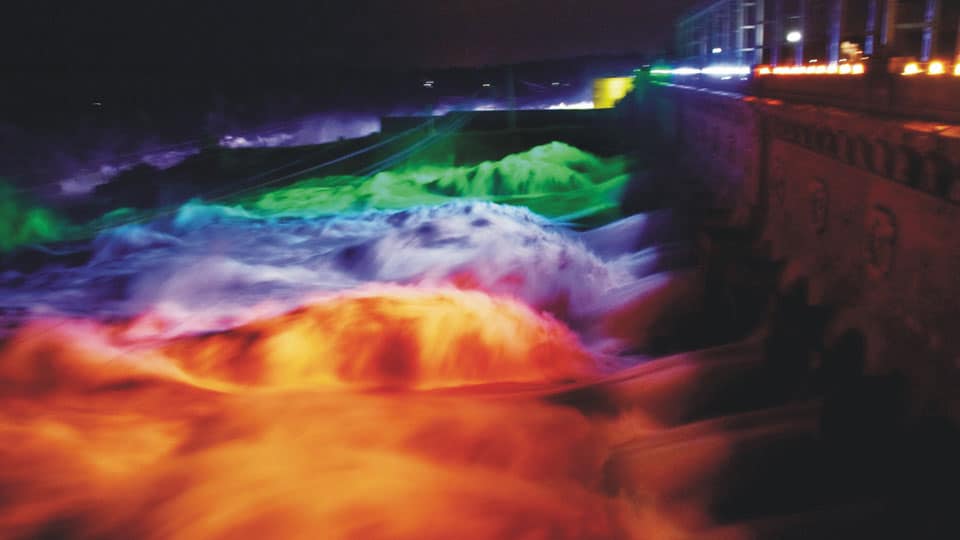 Flow of colours at KRS

Lightings to continue every day till the outflow stops

Mysuru :  The Krishna Raja Sagar (KRS) Dam came alive last night with a melange of colours as the Dam authorities have set up special lighting arrangements at the place where more than 1 lakh cusecs of water    is being released.

The lights were projected on water and the gushing waters looked like rivers of red, green, violet, magenta and orange. Hundreds of tourists who had come to the Dam to see the water release cheered as they saw bright colours gushing out from the Dam.

The show has been organised by Mandya District Administration and Cauvery Neeravari Nigam Limited (CNNL) and more than 500 lights were set up.

The lightings were switched on at 7.15 pm and the tourists were pleasantly surprised to see the lightings as there was  no prior announcement.

People, however, were not allowed to walk through the North Gate of the Dam that leads to its top as a precautionary measure. Only officials, guests and their relatives were allowed there. Still, people crowded the West Gate and were seen cheering the water release and clicking photographs. Intermittent rains did not deter them from enjoying the colourful display.

During the 10-minute 3D mapping programme, a grand history of KRS was showcased through audio and video  projection for the visitors.

The CNNL had also made arrangements for display of the spectacle on big LED screens at 10 different locations of the Dam last year for the benefit of public. The special contract was given to a Bengaluru-based company.

This year, however, the CNNL has itself made the lighting arrangements.