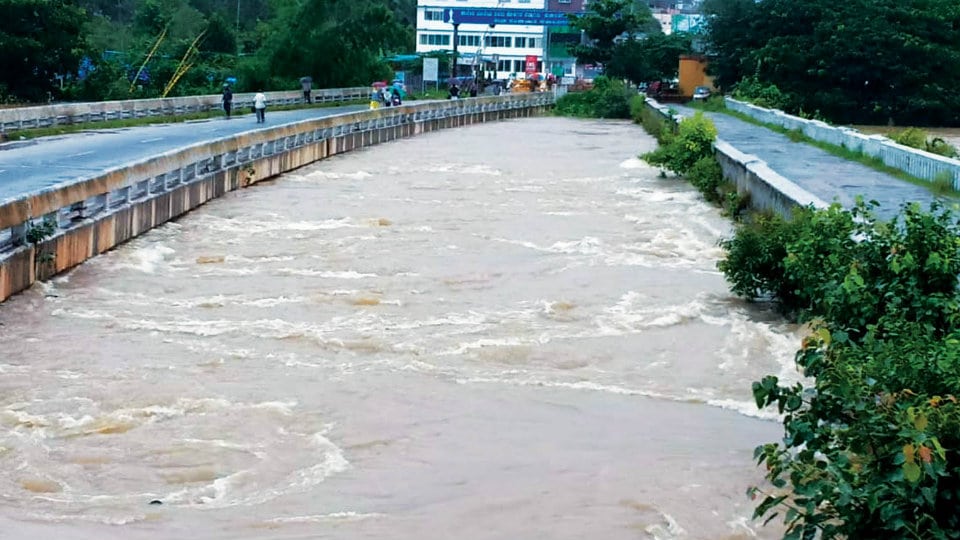 Kushalnagar:  A team from Geological Survey of India (GSI) will visit Kodagu in another two or three days to assess the damage caused by rain, flood and landslides. The team will determine the cause of landslides and will study the patterns.

The team is also expected to visit South Kodagu where extensive flooding has been caused along with landslides at a couple of places. Speaking to Star of Mysore this morning, K.V Maruthi, Director, GSI, said that floods and landslides had recurred in Kodagu this year.

“If we examine initial reports, landslides have occurred at those places this year which were severely affected last year. Surprisingly this year, South Kodagu has borne the brunt and floods were unheard of in this region. Even last year’s devastation of that scale was previously unheard of,” he said. Maruthi added that the GSI team will visit Kodagu to study the landslide patterns and submit a report to the Government.

In its report out of the study conducted from Aug. 27 to Sept.1 last year, the GSI team had  mentioned that modification of land for construction of infrastructure like houses, hotels, home stays etc., large-scale slope modification for plantation (especially coffee) is one of the reasons for the landslides and flooding.

“The main reason for devastation is rainfall and the slope modification by human interference. There are no guidelines or land-use regulations to monitor the lands in the area.

The State Government along with State Disaster Management Authority should henceforth frame strict guidelines/regulations for land-use in hilly terrains of Western Ghats in general and Kodagu district in particular,” the report had said.

It may be recalled here that in April this year, Retired Deputy Director-General of GSI, Dr. H.S.M. Prakash had predicted that the devastating natural calamity that had rocked Kodagu and Kerala last year will haunt these regions again this year between August and September.

Prakash had said that excessive rainfall are linked to volcanic eruptions in Hawaii and Mauritius. “Due to volcanic explosions there, clouds are formed which travel towards India. Water also gets evaporated because of magma liquid which is formed before the volcanic eruptions. There is a possibility of heavy rains being caused by these developments,” he had stated.

Kodagu received the highest-ever rainfall for August last year, surpassing an 87-year-old record. It was in 1931 that the district received 1,559 mm rain during the entire month. Data from India Meteorological Department, Bengaluru, showed 45% (768mm) of the record August rainfall was received within three days — Aug. 15, 16 and 17. If the rain quantity exceeds more than 200 mm a day it is termed extremely heavy. In Kodagu’s case last year, there was extreme rainfall for three consecutive days. The district recorded highest-ever daily rainfall when it recorded 300mm in a single day on Aug. 17. This year too, Kodagu is receiving high rainfall and as a result, rivers are in full spate and landslides have been reported at a few places.

This year, a unique phenomenon has been observed in Kodagu where the inflow from River Cauvery is more than Harangi River. Every year, Harangi River reports highest inflow to the Harangi Dam. While Harangi River originates in the Pushpagiri Hills, Cauvery takes birth in Talacauvery and flows through Bhagamandala, Kushalnagar and Koodige. Both the rivers meet at Koodumangaluru and flow into Harangi Dam.