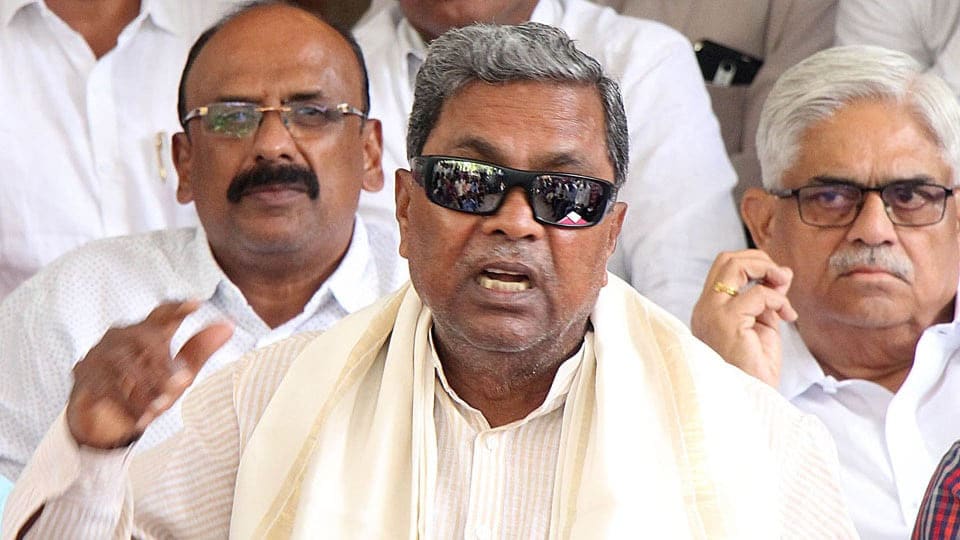 Addressing a press meet at his ‘Cauvery’ residence in Bengaluru yesterday, Siddharamaiah alleged that H.D. Deve Gowda was making baseless allegations against the Congress to gain public sympathy.

Stating that the people were clever enough to understand the ‘tactics’ of the JD(S) Supremo, the CLP Leader said that the people of the State have seen his (Siddu) political journey and as well as the ‘Family Political’ journey of H.D. Deve Gowda and his sons.

Claiming that he was forced to respond to H.D. Deve Gowda’s allegations against him, Siddu maintained that the Congress joined hands with the JD(S) to keep the BJP out of power.

Asserting that he did not meddle with the administration when HDK was the CM, Siddu accused HDK, H.D. Revanna and H.D. Deve Gowda of ignoring the Congress Legislators.

Alleging that Kumaraswamy did not implement any of the decisions taken at the JD(S)-Congress Co-ordination Committee meetings, Siddu said that the Congress Legislators were upset with the attitude of JD(S) leaders.

Accusing HDK and his brother H.D. Revanna, who was the PWD Minister in the Coalition Government, of meddling in all the Departments, Siddu squarely blamed the JD(S) actions for the BJP to come to power in the State.

Continuing his tirade against the Gowda family, the CLP Leader alleged that the Gowda family ensured that no other Vokkaliga leader grew up in politics. He cited the example of D.B. Chandregowda, K.N. Nagegowda, Jeevaraj Alva, C. Byregowda and others.

Referring to the BJP Government’s decision to hand over phone-tapping scandal to the CBI, Siddu maintained that he had not demanded a CBI probe, but only wanted an investigation.

Claiming that the CM had not sought his advice in handing over phone-tapping case to the CBI, Siddu refuted HDD’s charges that he may be behind the probe.

Replying to HDD’s charges that Siddu did not want to see H.D. Kumaraswamy as the CM, Siddu maintained that he did not do any dirty politics for ousting HDK’s Government.

He further alleged that the JD(S) leaders had hobnobbed with the BJP to form the Coalition Government with the BJP way back in 2006, when Dharam Singh was the CM.

Siddu blamed the JD(S) for the rise of BJP, which he said was a communal party with no agenda for an inclusive growth.

Reiterating that HDD’s family were backstabbers, Siddu said that the JD(S) did the same to the Congress what it did to the BJP in 2006, by failing to share power as agreed with the Saffron Party then.

The CLP leader also took pot-shots at HDK for crying in public, saying it was just a gimmick to earn public sympathy.