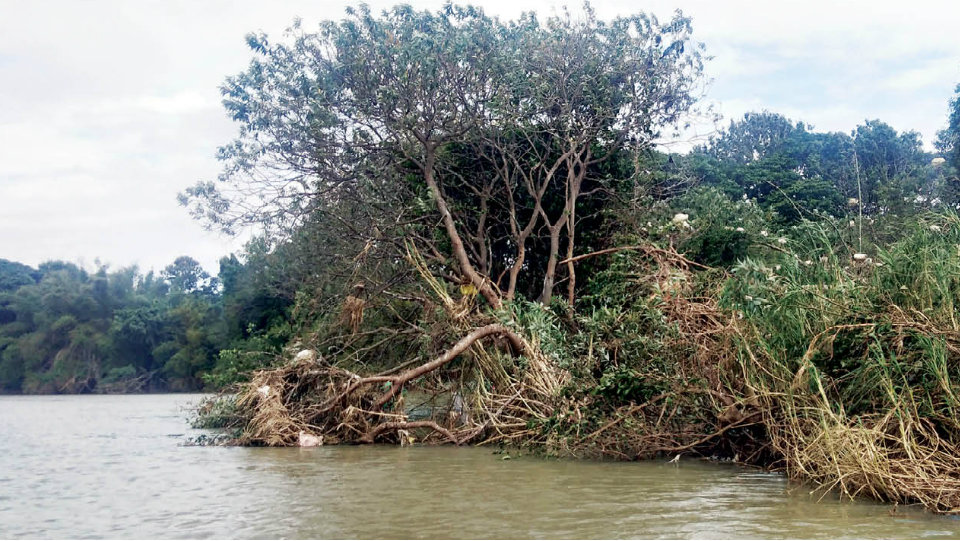 Srirangapatna: Heavy rainfall and the resultant water release from the Krishna Raja Sagar (KRS) Dam since a couple of weeks has flooded the world famous bird sanctuary at Ranganathittu, threatening the very existence of the winged beauties.

Water release from the Dam is showing no signs of abating as rains continue to lash the catchment areas of Kodagu. The islands at Ranganathittu are under water since the last 10 days and they have been flooding ever since water is being released from the Dam.

Though this year’s monsoon began a month late, it has been raining intermittently now and the India Meteorological Department has forecast rainfall for another three to four days in Kodagu. This means, more water will be released from KRS as the water level has reached its brim.

Ranganathittu Bird Sanctuary is one of the most popular tourist spots in the State and is rated as among the best in the country. The bird sanctuary, spread over 34 islands, attracts thousands of migratory birds (more than 200 species), including the rarest of the rare birds every year.

Whenever the Dam crest gates are open, on an average, over 60,000 to 75,000 cusecs of water is released and this turbulence has submerged the bird-populated islands of Ranganathittu, threatening birds, hatchlings and nests. Sometimes, the water release crosses the 1.50 lakh cusecs mark.

Of the 23 islands at Ranganathittu, 10 have been literally destroyed. Openbill Island, Large Cormorant Island, Kaadu Hunasemara Island, Stone Bill Island, Stone Flower Island, Neeranji Island, Hatthi Mara Island, Purple Heron Island, the island that is located at the middle of the river and the Bamboo Island have been submerged.

READ ALSO  CM to offer Bagina to KRS and Kabini Dams on Aug. 21

As there is full of water inside the sanctuary, Forest Department cannot estimate the damage as of now. The damages can be ascertained only after the water level recedes. Even last year, there was a same phenomenon where small trees in the islands were uprooted and sand bags kept on the banks of islands to prevent soil erosion washed away.

The swollen river also took away truckloads of mud from the islands and the concrete pillar barricades that were erected on the banks have been uprooted and the iron mesh railings had captured tonnes of plastic waste flowing along the river course.

Though there are not many nestlings now, except of the local variety, the rising waters would have washed away nests as most of the trees are half inside water. Many migratory birds have, however, shifted their habitat because of change of season and some local birds have moved to higher reaches.

There are around 125 crocodiles in Ranganathittu and many young ones of marsh crocodiles have been washed away while adults have moved up the banks. Officials said that the birds are trying to build new nests on the trees after the devastation. Last year too, the Forest Department restored a few islands by using sand bags but some of the sand bags have been washed away.

As the boating activity was suspended indefinitely with only occasional activity, the Forest Department has already faced a loss of up to Rs. 30 lakh. And as if to add fuel to fire, the islands have been submerged now. Forest officials say that the exact estimate of the losses could be arrived upon only after a damage assessment survey.