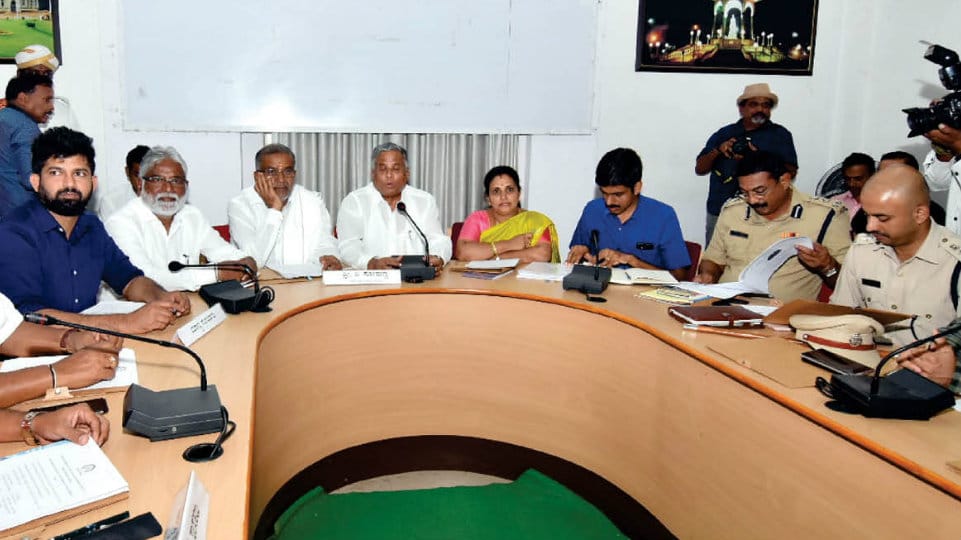 Mysuru: Newly appointed Mysuru District Minister V. Somanna chaired the first local Dasara meeting at Deputy Commissioner’s Office in city this morning. The meeting was held days after the Chief Minister B.S. Yediyurappa chaired the Dasara High Power meeting in Bengaluru in the presence of officials and had directed the Mysuru District Administration not to go for an extravagant Dasara but a traditional one without sullying the rich culture of the region.

Today’s meeting was held basically for Somanna to understand the annual Dasara festivities as he is new to this region. Though Somanna, as the MLA from Govindarajanagar, is well-versed in Bengaluru politics, before he attended today’s meeting, he told reporters that it will be a traditional Dasara with all its age-old customs, events and practices. “Suggestions will be accepted from every stakeholders to celebrate a traditional Dasara without compromising on culture,” he said.

But today’s Dasara meeting was out of bounds for reporters and only photo journalists were asked to take photographs and leave the meeting venue. Irked at this, journalists expressed unhappiness over the administration’s move to keep the press people out as if to hide details from the public. The Minister and officials forgot the role of media – an important stakeholder – in giving publicity, thereby attracting thousands of people for the festival and its allied cultural attractions, alleged journalists.

The doors of the meeting were locked after the photojournalists left the hall and the Minister was scheduled to address the media after the meeting suggesting that the media must know only what they (the VVIPs) had to say on select issues and not the entire proceedings of a State festival – a public event.

Sources said that during the meeting, Minister Somanna asked for suggestions from G.T. Devegowda who has the experience of steering last year’s Dasara. He also asked suggestions from the official machinery on the events conducted during last Dasara, events and people involved and expenditure incurred.

To prepare the officials for the Minister’s meeting, DC Abhiram G. Sankar held a preliminary meeting yesterday and chalked out broad plans to make this Dasara successful.