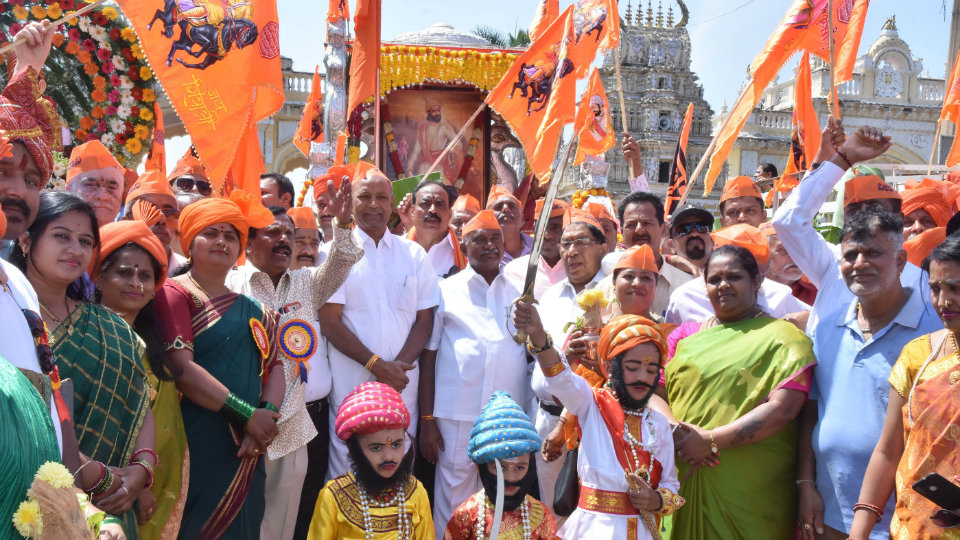 Mysore/Mysuru: Scholar Shivaji Jois has said that today’s youth should follow the ideals of Chhatrapati Shivaji Maharaj, who is the pride of India and fought valiantly to build a Hindu Samrajya.

“The 22 noble principles of administration enunciated by Shivaji Maharaj are still relevant today. Historians say that Shivaji’s ancestors hailed from Soratur, Gadag in North Karnataka. A number of works written by Shivaji has been translated to Kannada. Research is still going on about this great warrior. At the age of 14, Shivaji started fighting in the battlefield and by 19, he had successfully won a fort. He is known for his courage and bravery. For 35 years, Shivaji Maharaj dominated the landscape of Deccan region and resolved to create Hindu Swaraj,” he said.

“Shivaji had a high self-esteem, but he never had false pride. I would suggest everybody to read ‘Swarajya,’ a book about Shivaji Maharaj. I am very pleased that from the last 10 years the State Government is celebrating Shivaji Maharaj Jayanti as an official event,” he said.

As part of the celebrations, a colourful procession was launched from Kote Anjaneyaswamy Temple at the Palace North Gate in the morning, with many dignitaries and political leaders offering floral tributes to a large portrait of the Maratha King. The procession passed through K.R. Circle, D. Devaraj Urs road, JLB road and Field Marshal K.M. Cariappa Circle (Hotel Metropole Circle), before culminating at Kalamandira on Hunsur road.

Hundreds of people took part in the procession, which featured a host of cultural and folk troupes including Gombe Kunita, Dollu Kunita and others together with a man dressed as Shivaji riding on a white horse and a couple of tableaux depicting the heroics of the great Maratha ruler.