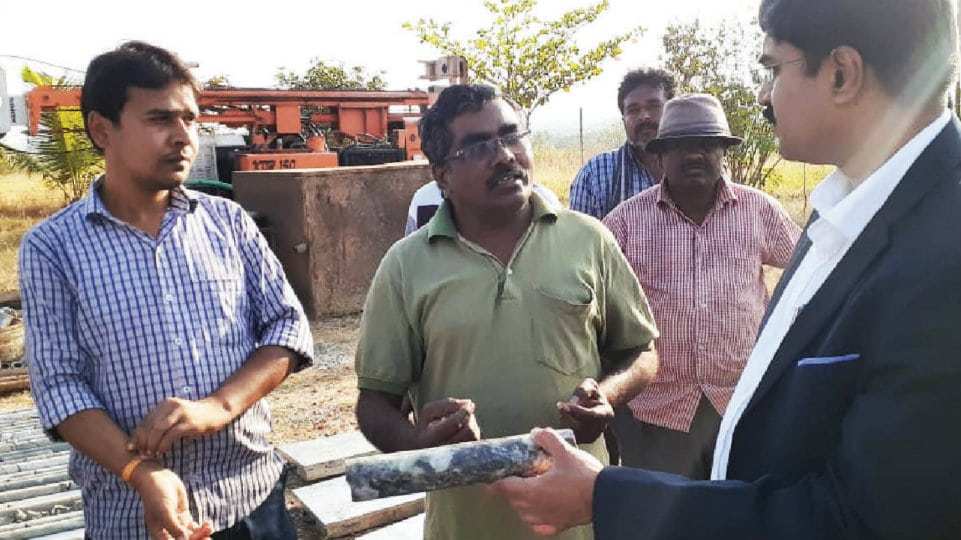 Boon for electric mobility in India

Mandya: In what could be a major boost to India’s electric vehicle dreams, researchers have discovered lithium reserves in Mandya district, a first in India.

Researchers at the Atomic Minerals Directorate (AMD), a unit of India’s Atomic Energy Commission, have estimated lithium reserves of 14,100 tonnes in a small patch of land surveyed in Allapatna-Marlagalla, Karighatta and surrounding areas in Srirangapatna taluk, according to a paper to be published in the forthcoming issue of journal ‘Current Science’.

“The present data provides a total estimation of available Li2O (Lithium Oxide) as about 30,300 tonnes over an area of 0.5 km x 5 km, which works out to about 14,100 tonnes of lithium metal,” the report quoted N. Munichandraiah, Emeritus Professor at the Indian Institute of Science, Bengaluru.

Following this discovery, Mandya Deputy Commissioner M.V. Venkatesh, accompanied by Scientist Rajesh and Tahsildar Roopa, visited Allapatna. He also sought a report from the Department of Mines and Geology.

Deputy Director, Mines and Geology, Pushpa said the exercise to trace reserves of minerals such as lithium demands many critical steps such as core drilling.

“Scientists have been exploring the area for rare minerals since 20 years in an area of 18 kilometres. A report on lithium deposits has been submitted to the Union Government. The discovery is still in preliminary stage and further tests will be conducted to find the ways and means to extract lithium and the costs involved,’ the DC said.

The discovery could be a booster shot for India’s environmentally-friendly electric plans. Currently, India imports lithium, from Argentina, Bolivia and Chile to meet its needs. Indian manufacturers source Li-ion batteries from China, Japan and South Korea. India is among the largest importers of Lithium in the world.

With a surge in usage of lithium batteries over the past couple of years, India’s lithium imports have tripled from 2016-17 to 2018-19. According to the Centre’s estimates, lithium battery imports stood at $929 million in  eight months to November, 2019.

The Indian Space Research Organisation (ISRO) manufactures lithium batteries but they are restricted for use in space applications. These are also limited in volumes. China dominates the Li-ion battery market. The Government has announced investments worth 1.4 billion dollars to make India one of the largest manufacturing hubs for electric vehicles by 2040.

We thought it was Kaage Bangara, say farmers, demanding compensation

Even as the Atomic Minerals Directorate (AMD) has been conducting tests on soil in Allapatna village to unearth lithium deposits, villagers and workers are not aware of what they are searching for. Following reports of rich lithium deposits, farmers are now demanding compensation as mining is being undertaken on a fertile land where crops are grown all through the year.

The search for Lithium is being conducted on a regular basis with around 25 to 30 people from nearby villages employed for digging the soil. Local villagers believed that the search was for Mica (Kaage Bangara).

Farmers of Allapatna and Marlagalla villages are demanding compensation for the land. “Many people are digging the land for lithium now. The land has been allocated to us in 1978 and we are growing ragi and horse gram. We are losing our land due to excavation and the Government must compensate us for land loss,” said farmers.

Officials, however, clarified that the lands where the excavations are being done, are under the control of AMD. If the farmers provide evidence that the lands belongs to them, the same would be verified and the Government will take a suitable decision.