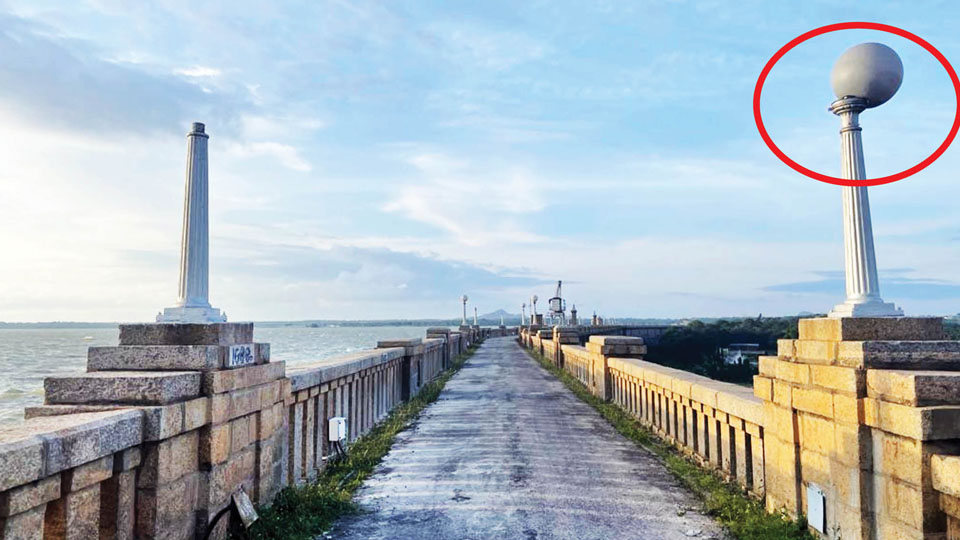 Srirangapatna: The KRS Dam is at the centre of livelihood in the districts of Mysuru, Mandya and Bengaluru and a major part of Tamil Nadu for several decades and is a lifeline, contributing to the region’s progress, prosperity and well-being.

Despite this, the security of the Dam has been neglected by successive Governments and by the people who sit in high offices. No concrete measures have been taken till now to ensure fool-proof security.

The Dam in Srirangapatna taluk of Mandya district is full to the brim now and the Karnataka State Industrial Security Force (KSISF) has been entrusted with the responsibility of ensuring its security and safety. Those in power ceremonially offer bagina to the Dam once it fills up every year but they have done little to secure such an important installation handed over by the Wadiyars of Mysore.

So pathetic the security aspect is that KSISF has now written to the Chief Engineer of Cauvery Neeravari Nigam Ltd. (CNNL) urging him to supply 15 new HHMD (Hand-Held Metal Detectors) as the ones that were supplied earlier were not working.

The Inspector’s Office of KSISF has written the letter on Aug. 24, the copy of which is in the possession of SOM. The letter states that CNNL had provided 19 HHMDs in the past and of them, only one is functioning.

“Dasara is nearing and thousands of tourists will head towards KRS Dam and it will be impossible to check them without HHMDs. Despite several verbal requests, HHMDs have not been provided. In the interest of security of the Dam, 15 additional HHMDs have to be immediately sanctioned,” the letter said.

There are more than 80 CCTV cameras at vantage points in KRS Dam premises and none of them are operational for the last six months and the batteries that supply power to the cameras have been burnt by continuous rain, lightning and thunder. There have been no efforts to repair them though crores of rupees have been spent on installing them. Though thousands of tourists flock to the Dam mostly in the evenings, many lights, including the major dome lights installed on top of concrete poles are defunct. Owing to this, many stretches on the Dam walkways are pitch dark.

74 security men, only 3 have bullet-proof jackets

The Dam security was managed by the State Police till 2016 and the security apparatus was handed over to KSISF later. There are over 74 security men guarding the Dam 24×7 and 68 Self-Loading-Rifles have been given to them. But only 3 personnel have been given bullet-proof jackets. Anyone can walk into the Dam premises unhindered as there is no luggage scanner at the entrance. The luggage scanner that was provided four years ago is dysfunctional now and has neither been repaired nor a new one has been provided.

The toll entry fee is collected by the contractor from the lakhs of tourists who visit the Dam on a day-to-day basis. While CNNL takes 75% of the income, 25% of the income goes to the contractor. This toll collection system, however, is not transparent and accounts are hardly maintained in a proper manner, said sources.

Though the official sailing calendar of 2022 has come to an end as two mega events were recently concluded at the KRS Dam backwaters, unregulated sailing has continued at the night under the cover of darkness.

Local residents said that boats were often seen floating in the middle of the night and the sailors were disturbing the tranquil atmosphere of the Dam with loud music. A couple of boats were spotted on the night of Aug. 20, residents said.

While some of the CNNL engineers refused to speak to Star of Mysore on the security mechanism at the Dam saying that they were not authorised to speak, CNNL Managing Director Shankaregowda said yesterday morning that he was busy in a meeting.