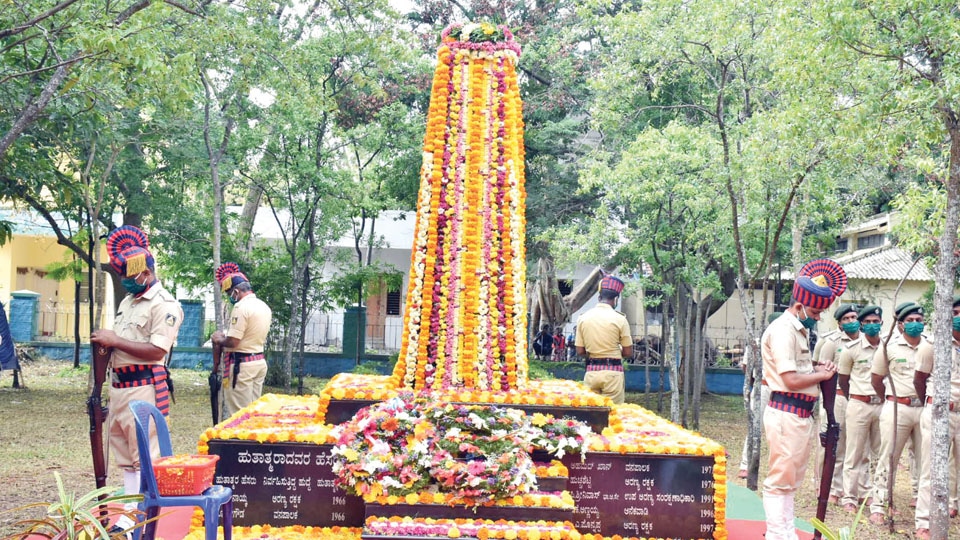 Mysore/Mysuru: Offering of floral tributes to Forest Martyrs’ Memorial and to the portrait of martyred Conservator of Forests  S. Manikandan marked the observance of Forest Martyrs’ Day at Aranya Bhavan here this morning. Also, Forest Department Personnel offered a Gun Salute by firing three rounds in the air.

Speaking as chief guest on the occasion, City Police Commissioner Dr. Chandragupta said that Senior Forest Officer Manikandan and other Forest personnel laid down their lives while doing not just their duty, but also while saving mankind.

Recalling his association with Manikandan while the two were serving at Ballari, Dr. Chandragupta said that Manikandan always strived for saving the rich natural resources there and the late Forest Officer is very much remembered by the people of Ballari even today.

Stating that Manikandan always fought for protecting nature and the environs, he said that it is the duty of every citizen to remember the services of such upright officers.

Noting that it is often said that Forest is the first cradle of a human being, the Police Commissioner said it must be remembered here that humanity existed in Forests thousands of years ago. Regretting that Forests began to dwindle with urbanisation and human greed, he observed that one should understand that there can be no land without forests.

Pointing out that saving Forests, environment, wildlife and green cover is vital for the globe, Dr. Chandragupta stressed on the need for educating people right from their childhood on saving ecology and environment.

He further said it is the obligation of every responsible citizen to join hands with the Forest Department personnel in conserving natural green cover and protection of rich bio-diversity.

Deputy Conservator of Forests (DCF) Dr. K.C. Prashanth Kumar said the Forest Martyrs’ Day is being observed  to pay respects to those who were killed while saving trees and protecting the Forests and wildlife.

He pointed out that the Day is also being observed in memory of Bishnoi Community members who laid down their lives while saving trees from being chopped off in Rajasthan in the eighteenth Century.

Recalling that over 360 people of tribal Bishnoi community, including women and children were killed on Sept.11, 1730, at  Khejarli in Rajasthan because they objected to felling of trees by the then King of Jodhpur Abhaya Singh who wanted to build a Palace there, he said that over 50 Forest Personnel of Karnataka have laid down their lives while on duty so far.

Reflecting on the martyrdom of some of the Forest Officers, Dr. Prashanth Kumar said that DCF P. Srinivas, who was posthumously awarded Keerthi Chakra and Forest Guard Mohanayya were brutally killed by Forest brigand Veerappan, while Sirsi RFO Aravind Hegde and S. Manikandan sacrificed their lives protecting the forests.

Dr. Prashanth Kumar further said that the State Government has announced a compensation of Rs.30 lakh to the family of  every Forest staff killed while on duty, Rs.10 lakh for permanent disability and Rs.2 lakh in case of serious injuries.

Speaking to presspersons on the occasion, DCF Alexander said that following a Government directive to shortlist the names of only five Dasara elephants in view of simple Dasara celebrations this year, the Forest Department has submitted a list of elephants — Abhimanyu, Vikram and Gopi; Kumkhi elephants Kaveri and Vijaya — to the office of the Principal Chief Conservator of Forests (PCCF)at Bengaluru.

Pointing out that the over 60- year-old elephant Arjuna, which used to carry  the 750-kg Golden Howdah during Jumboo Savari procession in the previous years, has not been considered this time in accordance with a Supreme Court directive that disallows any elephant aged over 60 years for carrying heavy objects, he said that the 53-year-old Abhimanyu has been found the most suitable for carrying the Howdah this time and it is certain that Abhimanyu will be finalised. Though Arjuna is fit even now for carrying the Howdah, he said that the Department has to adhere to the SC directive.

Pointing out that all measures are in place for ensuring the safety of elephants in the wake of reports of a Tiger catching Coronavirus at America’s Bronx Zoo, he said that the elephants will be checked for their health upon their arrival in city and all other measures will be put in place to ensure that all elephants stay in good health.