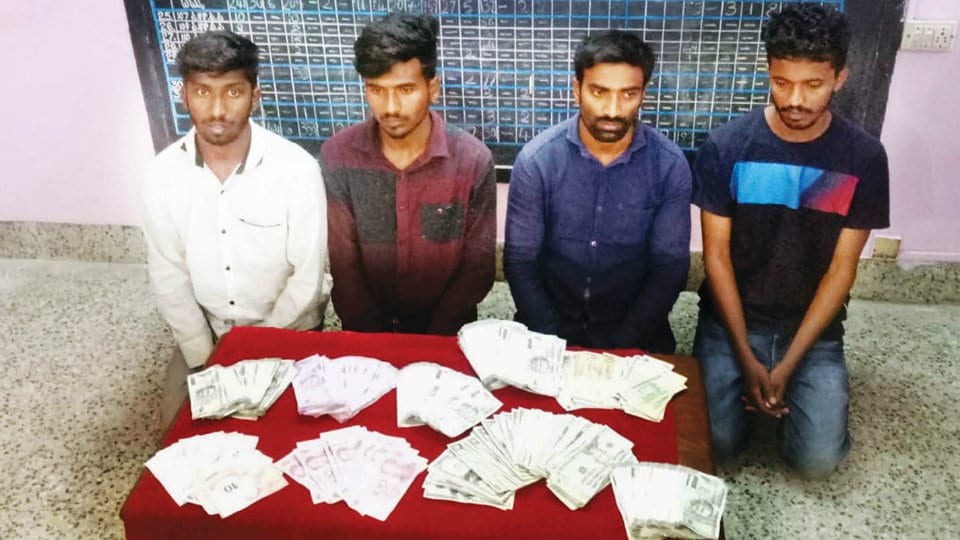 Mysuru:  City’s Vijayanagar Police have arrested four persons in Bengaluru on charges of committing dacoity in Mysuru. The Cops have also recovered Rs.8 lakh cash, two gold bracelets and a TV besides seizing the car purchased from the stolen money.

The accused have been identified as 28-year-old Sridhar of Mirle village in K.R. Nagar taluk of Mysuru, 24-year-old Prasad of Electronic City in Bengaluru, 20-year-old Bharathkumar of Amruthavalli in Bengaluru and 24-year-old Natesh of Koorgalli in Mysuru.

Following a complaint filed by one Arunkumar of city, the Police arrested the four accused in Bengaluru yesterday and produced them before a Court which has remanded them to  judicial custody.

The Police have launched a hunt to nab three more accused — Madhu, Ravi and Vijay of Bengaluru, who are absconding.

Sources in the Police Department told Star of Mysore that this gang of seven members had allegedly attacked complainant Arunkumar on Sept.22 night at about 10 pm on Kalidasa Road, near District Kannada Sahitya Parishat Bhavan in Vijayanagar and had decamped with Rs.19 lakh cash and foreign currencies worth Rs. 6 lakh, which he had kept in the dickey of his scooter.

Arunkumar, a resident of Vijayanagar First Stage in city, is running a foreign currency exchange centre at Shivarampet here and the dacoity took place when he was heading towards his house after closing his centre for the day. A case was registered at Vijayanagar Police Station in this regard.

Prasad, one of the accused, who knew the business transactions of Arunkumar and the route he takes to go home, had hatched a conspiracy along  with his friends at Bengaluru, sources said.

After quitting a job in a private bank in Mysuru, Prasad had moved to Bengaluru in search of a job a few months back and during his stay there, he planned the dacoity along with his friends in order to become rich overnight and lead a lavish lifestyle.

On Sept. 22 night, all the seven members attacked Arunkumar on the pretext of not stopping the vehicle after an accident. The irate gang picked up a fight with him, dragged him and fled with Arunkumar’s vehicle along with Indian and foreign currencies worth about Rs. 25 lakh.

Later, all the accused went on a tour to Ooty, Goa and other places and had even purchased a car, two gold bracelets, a television set from the stolen booty. Of the total Rs. 25 lakh stolen currencies, the accused spent about Rs. 11 lakh for their pleasure trip and the Police recovered remaining Rs. 8 lakh cash in Indian currencies.

The Police are yet to trace the stolen foreign currencies worth about Rs. 6 lakh.