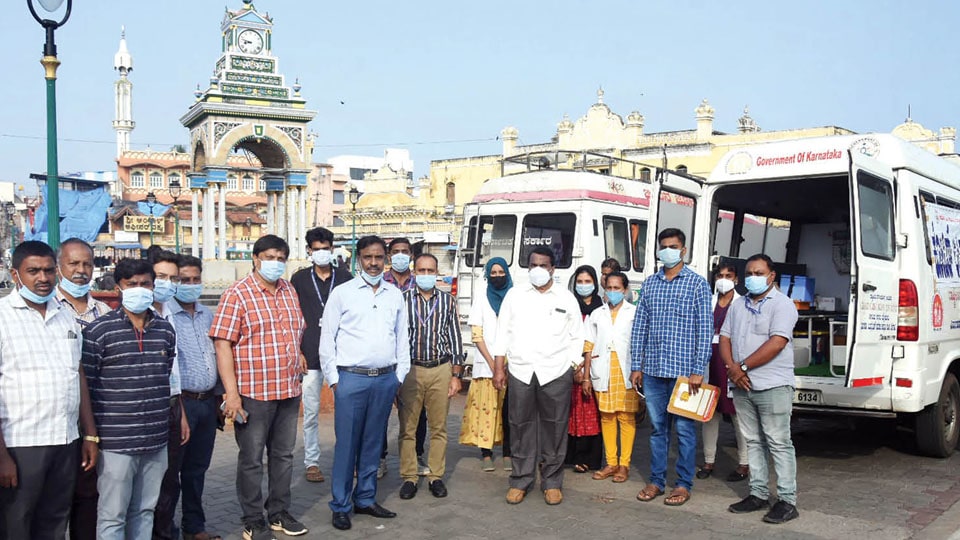 Mysore/Mysuru: Four mobile vaccination teams have been formed in Mysuru city by the District Administration and the Health Department to vaccinate the unvaccinated. Floating populations roaming around city areas are their main target. Similar mobile units have also been sent to taluks to vaccinate people in towns and villages.

While one mobile unit will be permanently stationed at Chikka Gadiyara due to the constant movement of the floating population here, others would go on city rounds and also stand at vantage points where the density of people is high like APMC Yard, City Railway Station, Bus Stands, Stone Building of K.R. Hospital and such areas.

Intensifying their operations, the Health Department and the Health Officers and Inspectors of the Mysuru City Corporation (MCC) have formed surveillance teams to check the implementation of the latest rules released by the State Government in view of the Omicron threat.

These teams are visiting malls and theatres and are supervising the arrangements made to check the vaccination status of the people who are entering. As per the Government order, only those who have received both COVID-19 vaccine doses will be allowed in public places like parks, malls, hotels and theatres.

Teams are also checking gatherings, meetings, conferences, etc. where the number of participants has been limited to 500 people only.

COVID-19 appropriate behaviour shall be strictly enforced during the event and the responsibility to enforce the same lies with the organisers and violators are being booked without any exceptions under the provisions of Disaster Management Act.

Meanwhile, with the threat of the Omicron variant looming large, now many people are rushing to take vaccines. Earlier, it was the same people who disregarded Government directions to get vaccinated for months. Public, particularly youths, are thronging the vaccination centres in large numbers now. Though vaccinations were administered regularly at all Government Hospitals, Primary Health Centres (PHCs) and Taluk Health Centres (THCs) the booths were empty for the last three to four months as people believed that COVID had gone away and there was no need for vaccination. But now people are waiting in line to get the jab.