Home » News » Four Palace elephants to be rehabilitated in Gujarat 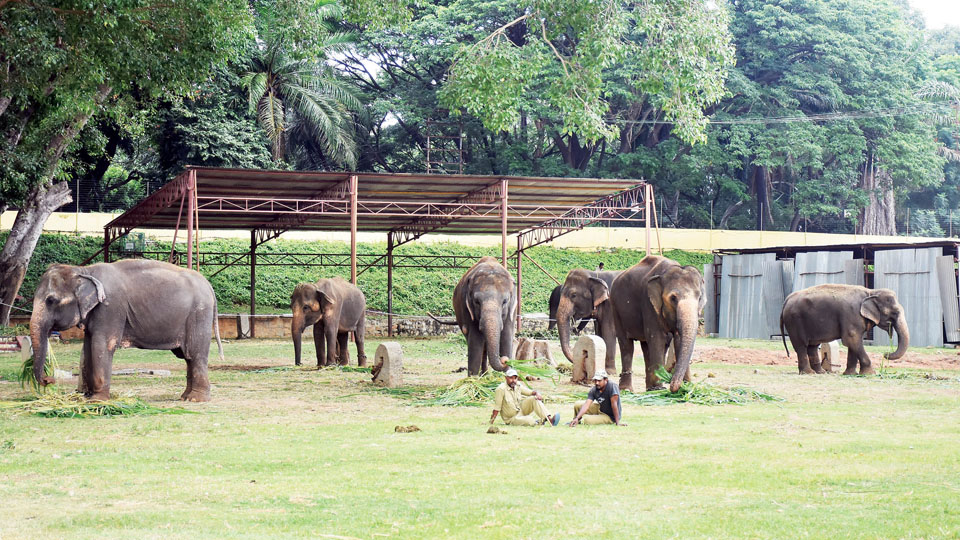 Four Palace elephants to be rehabilitated in Gujarat

Mysore/Mysuru: Four out of six female elephants from the Mysore Palace will be shifted to a rehabilitation centre in Gujarat. The elephants are stationed inside the Palace and are being taken care of by the erstwhile Mysore royal family.

A letter in this regard has been sent to the Deputy Conservator of Forests (DCF) K. Kamala Karikalan by senior forest officials from Centre and Wildlife Protection Fund. Accordingly, elephants Seetha, Ruby, Gemini and Rajeshwari will be shifted while Chanchala and Preethi will remain with the Palace.

The decision has been taken keeping in mind the health of the elephants that have been stationed inside the Palace since decades. The female elephants do not have male companions and keeping a constant eye on their health is turning out to be a tough affair.

Confirming this to Star of Mysore, Kamala Karikalan said that the communication from the Centre stated that a report must be submitted on the health of all the six elephants. “DCF (Wildlife) Dr. V. Karikalan will have to certify their health condition and a letter will be written in this regard,” she said.

The elephants were rescued from Gemini Circus decades ago following a Court order. Animal rights activists had petitioned the Court where they claimed that the elephants were being tortured in the name of entertainment. The Court had ordered the Forest Department to take over the elephants.

Following the Court order, the then scion of Mysore royal family Srikantadatta Narasimharaja Wadiyar had volunteered to take care of the elephants and accordingly, they were sent to the Palace.  The elephants were one of the main tourist attractions inside the Palace and they were being used for “elephant safari” where tourists had an opportunity to ride on them and experience royalty.

In March 2017, Pramoda Devi Wadiyar had asked the Forest Department to take back three elephants due to administrative inconvenience as there were problems with a few elephant handlers who were not doing a proper job of looking after the elephants.

Though many letters were exchanged between Pramoda Devi Wadiyar and the Forest Department, the elephants remained inside the Palace due to bureaucratic tangles and other issues. Now Pramoda Devi has consented to the Government move to shift the elephants.

It takes anywhere between Rs. 7 lakh and Rs. 8 lakh to maintain an elephant every month. The salary of Mahouts and Kavadis is Rs. 40,000 per month and it amounts to Rs. 2,40,000 per month. Also there are other requirements like food, medication and overall health.