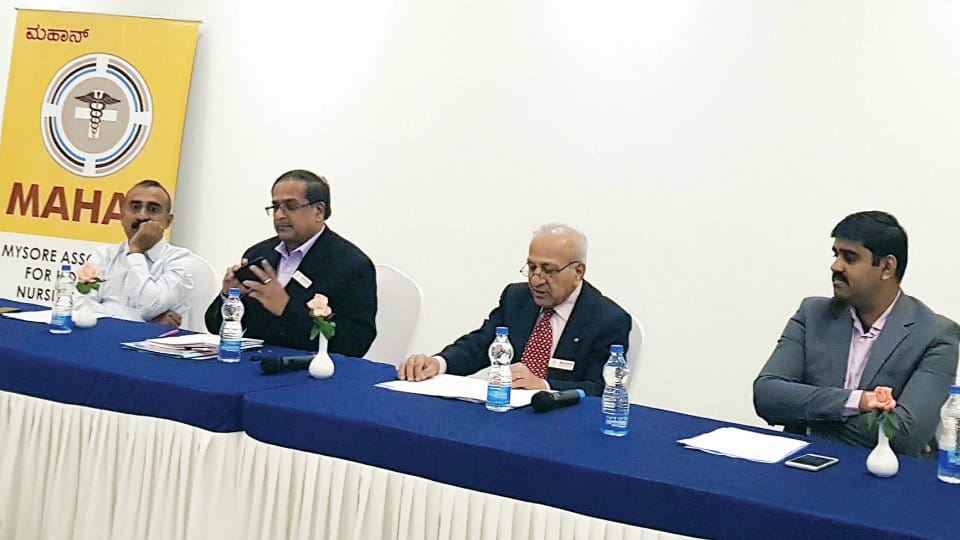 Mysuru: MAHAN, the Mysore Association of Hospitals, Nursing Homes and Diagnostics, at its recently held Fourth Annual General Body Meeting, resolved to strengthen its membership base and extend its public service activities like medical camps, health awareness lectures and marches to spread consciousness among citizens about the harmful effects of evils like tobacco and alcohol.

Welcoming the members of the general body, MAHAN President Dr. C. Mahesh Kumar stressed upon the need for doctors to remain united to ensure that their interests are protected and the problems faced by them are resolved easily through collective effort.

He expressed happiness that ever since its inception MAHAN members had been able to achieve significant progress in countering and setting right many retrograde policies of the government that concerned the private health care sector which was the biggest provider of quality health care in the State. Had this not been done the very survival of private health care establishments all over the State would have been imperilled.

He thanked members for their unstinting support to the organisation and stressed that it was only their sustained and united efforts which had made this possible and which would also make it possible in the future to protect the interests of both the private health care providers and also the patients who depended on them for their good health. He therefore urged all private health care providers in and around the city to become members of MAHAN and thus strengthen it.

When members unanimously decided to continue having the same office-bearers for the coming year too, Dr. Mahesh Kumar thanked them for placing their faith in the same team.

Presenting a report, Association Secretary Dr. B. N. Rajeeva gave a detailed account of all its activities over the past one year and a synopsis of its performance ever since its inception.

Dr. Santrupth, Treasurer, presented the balance sheet of its accounts. Dr. Vijaya Cheluvaraj, Joint Secretary, proposed a vote of thanks.

The meeting was followed by a cultural programme where doctors and their family members too presented their talents in association with Thiagraj, a very popular singer of the city.

Incidentally, this programme almost resembled a miniature version of ‘Geeth Gaatha Chal’ the unique and very popular doctors’ annual musical nite, as many of the performers were the same !