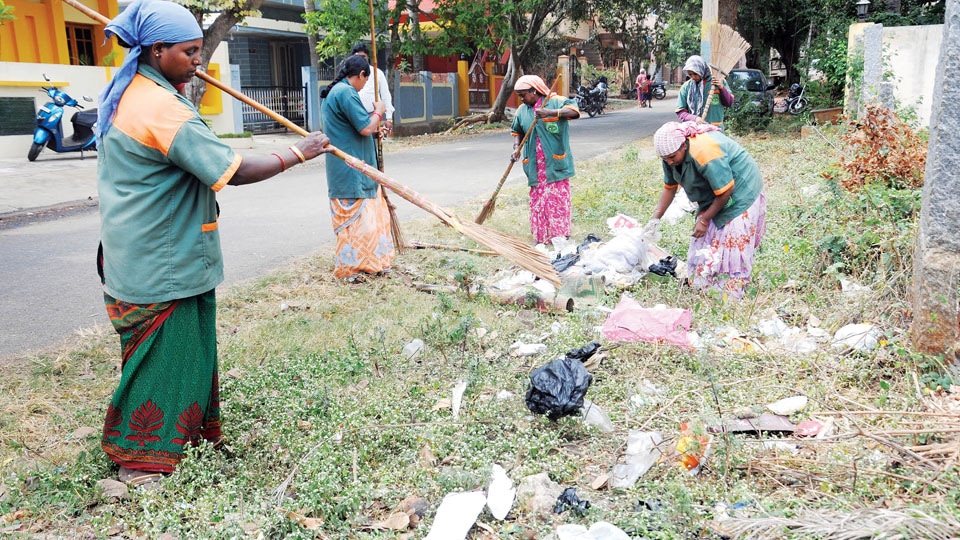 Free breakfast for Pourakarmikas from Nov. 15

Mysuru:  The Mysuru City Corporation’s (MCC) ambitious plan to provide free breakfast daily to hundreds of Pourakarmikas is all set to take off on Nov.15, marking Kanakadasa Jayanti.

The breakfast Scheme will be launched at 8 am on Nov.15. A meeting was held at the MCC office here this morning during which the modalities of the  scheme were discussed. However, an official announcement on the launch is awaited.

The Scheme, when implemented, will benefit over 2,400 Pourakarmikas including 2,138 working in  sweeping and cleaning section and 238 employed in underground drainage (UGD) section. The MCC has issued an annual Rs.1.83 crore tender for providing free breakfast to the civic workers for a period of one year. The Scheme covers all the 65 Wards of the MCC under nine Zones.

It may be mentioned that the free breakfast Scheme was supposed to be launched on Mar.1, 2017, when the MCC authorities had said that they would provide  free nutritious breakfast to all the Pourakarmikas who clean the city between 6 am and 10 am. When the breakfast idea was mooted in 2017, the MCC authorities  had maintained that a majority of civic workers don’t find time to prepare breakfast as they leave their homes for work early in the morning.

The authorities had contended that Pourakarmikas had to invariably wait for food standing in front of hotels, which was rather embarrassing for them.

Also, during many health camps it was found that skipping breakfast was one of the reasons for Pourakarmikas falling ill often. The MCC had planned to use funds from the SC/ST welfare fund for the Scheme.

Now, after over two-and-half- years since the idea was mooted, the Scheme is seeing the light of the day, with the MCC  all set to launch the initiative, much to the cheer of the Pourakarmikas who keep the city clean and maintain hygiene.

When the proposed Scheme was brought to the notice of the then CM Siddharamaiah, he had advised the MCC not to hand over the Scheme to inexperienced agencies but to approach ISKCON’s Akshaya Patra.