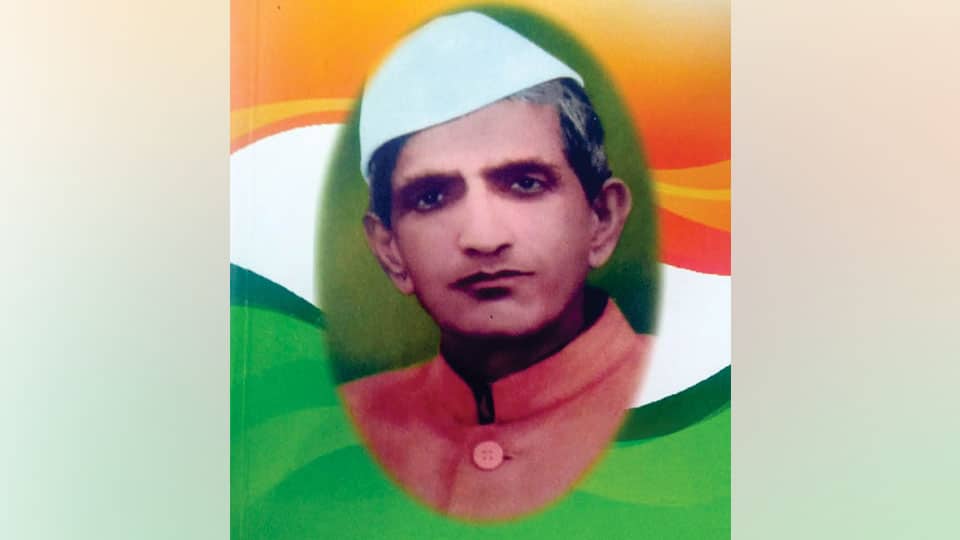 Every August 15, we pay respects and also invariably remember our freedom fighters. Patriotism knows no borders and Indians across the world pay their respects. That is why it is said that mother and motherland are superior to heaven. All these thoughts came to my mind when I was writing this note as my homage to our motherland.

Arun Kumar, a friend of my son Prof. Santosh Kumar, gave me a book ‘My Reminiscences’, written by late B. Narayana Swamy. I went through this book, found it interesting and I thought it would be worthwhile sharing its contents with the readers of Star of Mysore.

‘My Reminiscences’ is authentic as it narrates the experience of the author himself and not by a third person. The photo on the cover jacket of the book shows a handsome person with a closed collar coat with a white Khadi cap on his head — a typical freedom fighter and Gandhian. Such persons are a vanishing tribe.

S. Doreswamy, another distinguished freedom fighter, has written a foreword to this book. The most important sentence in this foreword is what Gandhiji said that a social worker should hug voluntary poverty. What a noble thought indeed. Narayana Swamy adopted this throughout his life.

Narayana Swamy was born on 25/26.10.1901 at Shikaripura in Shivamogga district of Karnataka. His was a big family of brothers and sisters and some of them died quite early, making life of Narayana Swamy almost miserable. His father was a Sub-Registrar. Narayana Swamy studied at Srirangapatna and later at Marimallappa School in Mysore. B. Venkatakrishnayya (grand-old-man called Thathaiah) was the Head Master of that School.

Narayana Swamy married when he was 15 and his wife Kanaka was only 9 years and the marriage took place in 1917. Subsequently he joined BA class at Maharaja’s College, Mysore, where N. S. Subba Rao was the Principal and teachers included B.M. Srikantaiah, A.B. Mackintosh, S.V. Ranganna, A.R. Wadia and A.N. Murthy Rao. He graduated in 1927 and went to Madras (now Chennai) to study Law.

In 1927, an All India Congress Session was held at Madras and this gave him the opportunity of having the darshan of Mahatma Gandhi. Those who attended the Session included Motilal Nehru, Jawaharlal Nehru, C.R. Das, Subhas Chandra Bose, Sardar Patel, Sathyamurthy, Maulana Abdul Kalam, E. Ramaswamy Naickar etc. Narayana Swamy was fortunate that he talked, walked and dined with them.

Simon Commission came to India in 1927 and protestors were fired at by the Police and some persons died. During his Law College days, Narayana Swamy had met great lawyers who are again celebrated names to us. Special mention should be made of T.P. Kailasam. They all enacted a Shakespeare’s drama which was witnessed by Kanteerava Nalwadi Krishnaraja Wadiyar, the Yuvaraja then.

Subsequently, Narayana Swamy opened a lawyer’s office at Shivarampet in Mysore and gradually became a good lawyer. He had the good fortune of meeting Krishnaraja Wadiyar, the 4th Maharaja of Mysore, and civil savants like N. Madhav Rao, H.C. Dasappa and others. He took part in Shivapura Satyagraha. Then he became a Secretary of Mysore City Congress Committee. During this period he met C. Rajagopalachari, Vinobha Bhave and others.

For anti-British activities he was kept in the Mysore Jail for two months. In the jail he had other friends like S. Nijalingappa and subsequently he was elected to the Mysore Representative Assembly. Many people like M.N. Jois and Tagadur Ramachandra Rao were also lodged in the same jail. He saw five freedom fighters being hanged and thought that he would also meet the same fate one day. The food in the jail was substandard and Narayana Swamy and others refused to eat it and they were beaten up by jail authorities. Many persons used to smuggle puliogare to the jail but he refused to eat it. In 1947, his mother died but he was not allowed to take part in the funeral.

In 1948, Narayana Swamy was appointed Director of Akashvani and was paid Rs.5 for reading the news. Actually, Akashvani was started by M.V. Gopalaswamy and Sir Mirza Ismail installed official broadcasting in the present building.

Rajaji became the Governor General and as leader of the Mysore Ministry, Narayana Swamy arranged a civic reception at the Town Hall (Rangacharlu Memorial Hall), Mysore. Sir M. Visvesvaraya and Mirza Ismail visited Akashvani and as the Director, Narayana Swamy had arranged for a technical person to answer their technical questions.

In 1952, General Elections were held to the Legislative Assembly and Kengal Hanumanthaiah was bent upon becoming the Chief Minister. Many people wanted Narayana Swamy to contest. A deposit of Rs. 200 had to be paid besides election expenses. His friends managed to get Rs. 2,000.

Today, crores of rupees are spent to contest election. Nijalingappa sent a telegram congratulating Narayana Swamy on his success in the election. During that period, Nehru paid a visit to Mysore and he came with Jayachamaraja Wadiyar in his Rolls-Royce car and at that meeting Narayana Swamy was informed that he was made the Chairman of Executive Committee, a prestigious post indeed.

In the elections held in 1962 and Narayana Swamy was denied a seat because of his outspoken nature. However, he was made the Chairman of the City Improvement Trust Board (CITB), now MUDA. He made use of the opportunity to serve the people and made no money. Elections were held and Sahukar Chennaiah defeated Narayana Swamy, thus ending Narayana Swamy’s election career. Nijalingappa gave Narayana Swamy freedom fighter’s pension. For him money was not important but the honour was significant.

Narayana Swamy realised that he had become old and his left eye and ears had become defective. He was operated at the Mission Hospital by Dr. Neelakantappa. During his active days he played cricket with Major C.K. Naidu, Gopalan and C. Ramakrishna. He also played football with Kempaiah, Krishnaswamy Iyengar, Muniswamy, D’Costa and others.

Besides, he was associated with many cultural organisations. He was also arranging music programmes at the famous Aralikatte Ramotsava. It was a golden moment in his life that His Holiness the Seer of Parakala Mutt honoured him with a gold-brocaded shawl, garland and fruits.

When he was the Chairman of the CITB, many contractors came to Narayana Swamy’s house and offered fruits and garlands. Once a contractor had kept currency notes under a fruit basket and seeing this, Narayana Swamy rejected the basket and blacklisted him from the contractors’ list. That was the honesty and integrity of this person. He passed away in 1983.

3 COMMENTS ON THIS POST To “Freedom Fighter B. Narayana Swamy”