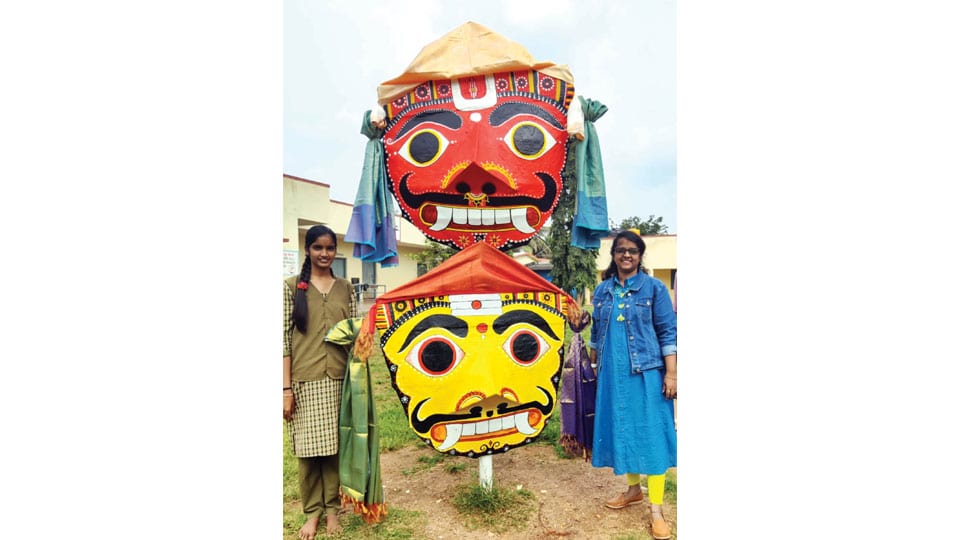 Mysore/Mysuru: G.B. Sargur Government High School, H.D. Kote taluk in Mysuru district, will be representing the State at the National-level ‘Kalotsava’ for the second time in a row this year.

Bhavya, a Class IX student of the School has been selected to take part in the 3D (Three dimensional) category of the contest to be held in Bengaluru between Jan. 1 and 12, 2022. Bhavya bagged first place in the State-level competition held virtually for creating a mask of ‘Somana Kunita.’ She has created the model by using bamboo, cotton fabric and paper under the guidance of art teacher K. Sangeetha.

In January this year, two other students of the same school — G. Aishwarya, a tenth standard student and A. Chandana, a ninth standard student — were selected to take part in the National-level ‘Kalotsava’ held at New Delhi in 3D contest and native toys categories respectively where Chandana was awarded second place.

Aishwarya had crafted a clay idol of Goddess Chamundeshwari Devi riding a tiger while Chandana had created an art work on a bottlegourd.

Speaking to Star of Mysore, art teacher K. Sangeetha said “Due to pandemic the event is being held virtually from the previous edition. For State-level contest, we had to send entries by making video of the art. Now, those selected for National-level will have to make the art piece live during the virtual session which is scheduled to be held at Department of State Education Research and Training (DSERT) studio in Bengaluru. Juries will evaluate the participants online from New Delhi.”