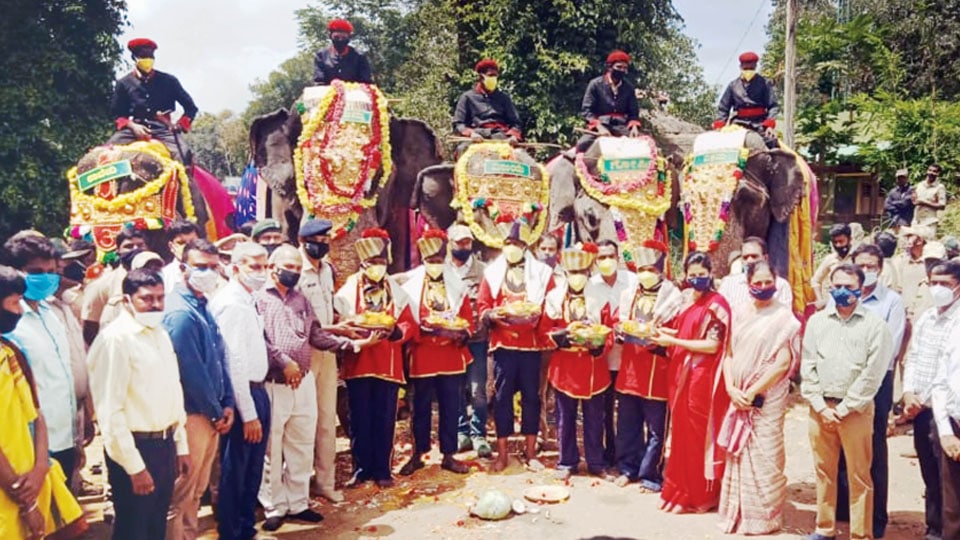 Hunsur: ‘Gajapayana’ (marching of elephants) of five elephants which will take part in Dasara-2020 began at Veeranahosahalli on the outskirts of Nagarahole National Park in the taluk this morning.

The otherwise fanfare affair with the presence of elected representatives and cultural troupes, this time it was a low-key affair with no single politician present on the occasion.

On behalf of the State Government, Mysuru Deputy Commissioner Rohini Sindhuri flagged off the event by offering flowers to the Dasara elephants. The threat of COVID-19 was so much visible that not even local people were present at the spot to accord send off to elephants being transported to Mysuru for Dasara festival.

At around 11 am, the DC offered flowers to five elephants — Howdah carrying elephant Abhimanyu, Vikram, Gopi, Vijaya and Kaveri. She also offered ‘tamboola’ to all five Mahouts to mark traditional welcome to them for this year’s Dasara festival. The one and only batch of five caparisoned elephants led by Abhimanyu started their journey from the jungle camps to the Mysore Palace.

Talking to media, Rohini said she flagged off the event symbolically  following directions from the State Government to celebrate Dasara-2020 in a simple manner.

In the wake of spurt in Corona positive cases, the inauguration was left to only officials.

As a precautionary measure, no cultural troupe was allowed this time. “We have prayed Goddess Chamundeshwari, the presiding deity of Mysuru, for peaceful conduct of Dasara in view of the pandemic,” she said.