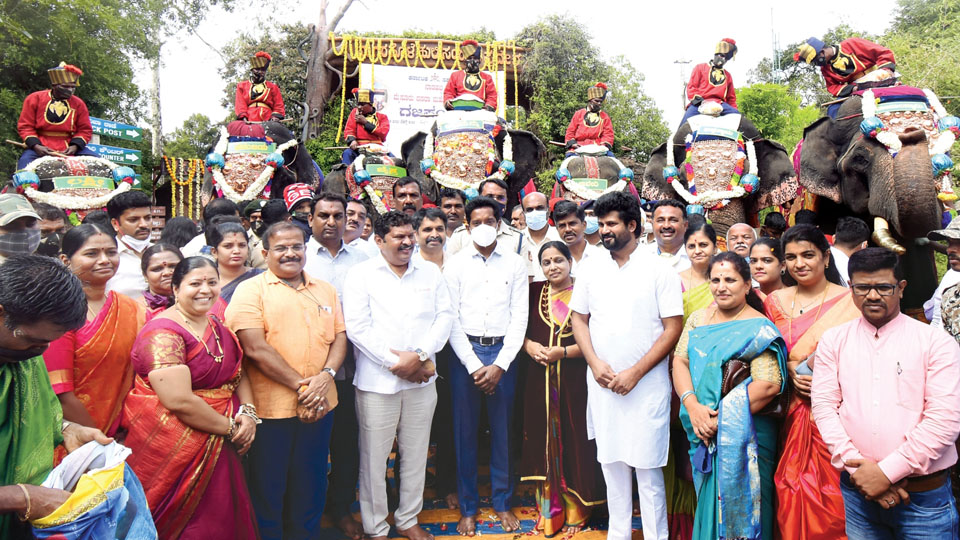 Mysore/Mysuru: Signalling the official countdown to the scaled-down Mysuru Dasara-2021, eight caparisoned elephants led by Abhimanyu — the Golden Howdah-carrying elephant — embarked on Gajapayana, their journey from the elephant camps to Mysore Palace this morning.

They reached the Forest Department’s Aranya Bhavan at Ashokapuram at 2 pm after their weight was recorded on the outskirts of Hunsur.

Gajapayana is now a symbolic event which was once an elaborate affair where the elephants, mahouts, kavadis and families used to travel over 80 to 100 kilometres from the forests to Mysuru by foot. But in the present times, the elephants and the entourage symbolically march a short distance after which they are transported by trucks.

The Gajapayana was flagged off at Veeranahosahalli Gate on the outskirts of Nagarahole National Park amidst rain that began early in the morning and continued till the traditional Pushparchane. The Gajapayana signals the countdown for the Dasara festivities that will be held from Oct. 7  to 15. The jumbos will take part in the Vijayadashami procession on Oct. 15.

Due to the ongoing Assembly Session, only Mysuru-Kodagu MP Pratap Simha and Hunsur MLA  H.P. Manjunath were the elected representatives who attended the event today where over 300 people participated. However, there was no sense of social distancing and COVID-appropriate behaviour with people crowding in front of the elephants, not to miss a good photo op.

The event began in the auspicious Tula Lagna between 1.20 am and 10.15 am. The puja was performed by priest S.V. Prahallad Rao who has been tasked with performing pujas to the Dasara elephants for years. The rituals began with Padapuja with ‘Arishina Kumkuma’ sprinkled at the feet of the elephants. Later, the elephants were fed with ‘Modaka’ and ‘Pancha Phala’ (five fruits).

Leading the team was Abhimanyu from Mathigodu Elephant Camp. He was captured in the Hebballa Forest in Kodagu in 1970. He has been participating in Dasara since 2012 and had pulled the music band carriage till 2015. Abhimanyu was accompanied by seven other elephants — Ashwathama, Dhananjaya, Vikrama, Kaveri, Chaitra, Lakshmi and Gopalaswamy.

Today, however, only seven elephants stood in the line as there was no space. Vikrama had to stand outside as he had already been accustomed to the rituals in the past. Vikrama made way to Ashwathama who is taking part in Mysuru Dasara for the first time. He was captured in 2017 and has already been trained to climb and alight trucks by his mahout Shivu and kavadi Ganesh.