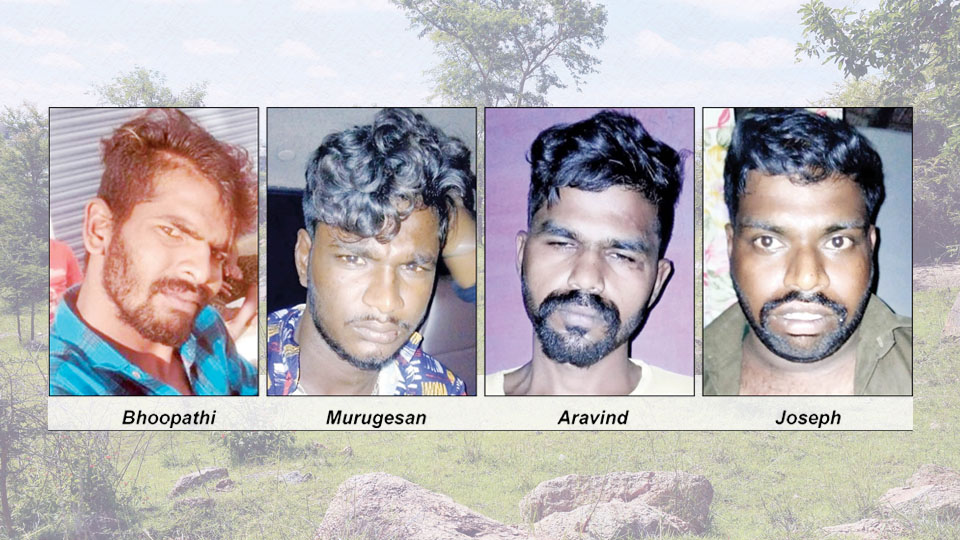 Mysore/Mysuru: A day after the arrest of five accused including a minor in the sensational student gang rape case, the City Police have begun drilling them to elicit more information about the heinous act and past incidents of crime. They are being questioned at an undisclosed location by a team headed by Devaraja ACP Shashidhar.

Preliminary statements from the accused reveal that they were habitual offenders and used to regularly target pairs who come to secluded spots around the Chamundi foothills like Lalithadripura and Lalitha Mahal surroundings to spend time in the evenings. They were emboldened as the victims did not lodge Police complaints in the past.

Police sources said that during separate interrogation, the accused — Bhoopathi, Murugesan, Aravind, Joseph and a minor — told the interrogators that lack of security, patrolling and monitoring of the foothills, Ring Road and surrounding areas had made their job easy.

They used to finish their work at APMC Yard in Bandipalya and head towards liquor shops to booze and later proceed to the foothills to target lovers.

The accused told the Police that in the past they had targeted four to five pairs at the foothills and had molested the women after threatening the male partner. They used to extort money from the pairs and even snatched their mobile phones like they did to the gang rape victim and her male friend.

After the loot, they used to head towards Tamil Nadu in goods vehicles and also vegetable vehicles returning to the neighbouring State.

As their targets never lodged Police complaints due to fear and social stigma, the accused became bolder and have ended up in gang raping their latest victim.

Police sources said that in a couple of cases, even passers-by were targeted after waylaying their bikes. Cash, jewellery and mobile phones were robbed but here too, the victims did not lodge complaints.

The accused had made Mysuru their target of criminal activities and used to get away easily under the cover of darkness after committing the crime.

Police sources said that one of the accused Bhoopathi of Susaipuram near Thalavadi of Tamil Nadu had been arrested by the Nazarbad Police six months back in connection with a sandalwood tree theft.

While Bhoopathi is involved in more than 10 cases, Murugesan was involved in a murder in Erode district that occurred around two years ago. Meanwhile, a Police team has been stationed in Tamil Nadu to arrest one more accused in the gang rape case. The Police are tracking his movements in close coordination with the back-end technical team that is stationed in Mysuru.

State Director General and Inspector General of Police Praveen Sood is camping in Mysuru and this morning, he addressed a meeting of Police officers at Hotel Radisson Blu Plaza where over 25 officers were present.

Lauding the teams for achieving a breakthrough in both the Vidyaranyapuram shootout and also the sensational gang rape case, Sood told the Police to fill all the gaps in the investigation. He briefed the Cops on how rapists must be interrogated and how more evidence has to be collected to make their case stronger.

“Detection is the first stage. We have done it. Securing conviction is the second stage, we will have to get it done. This case is challenging because the victim has not yet given her statement and we must not allow the accused to go scot-free,” Sood told his officers.

As per the orders from Home Minister Araga Jnanendra, patrols have to be stepped up at Chamundi Hill and more security must be provided after 7 pm, every day. He told the officers that there has been a lapse in security and these kinds of incidents must not occur again. The State Top Cop told the teams to be extra vigilant towards crimes against women.