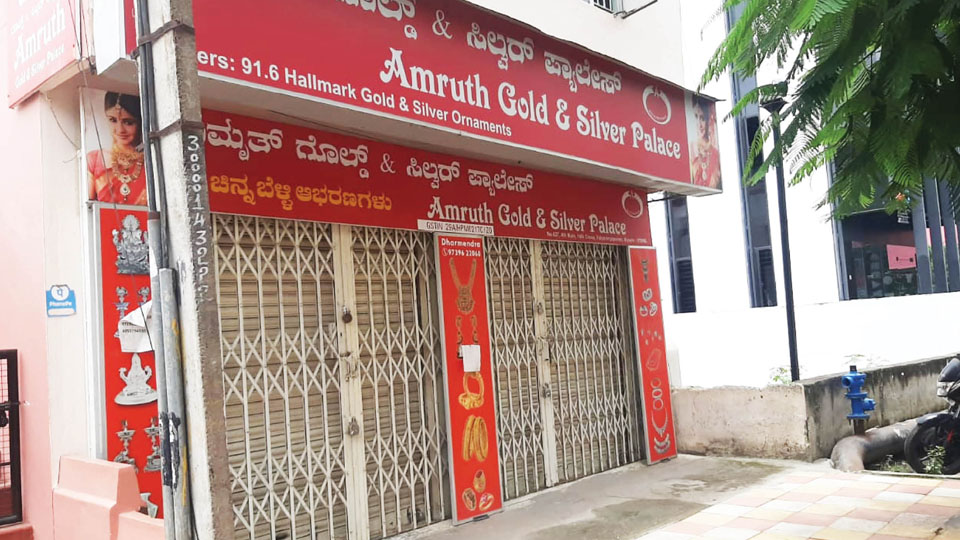 Mysore/Mysuru: Over 2 kgs of gold ornaments were looted from Amruth Gold and Silver Palace at Vidyaranyapuram and the lion’s share has been taken from an elderly gangster, the ninth accused in the case, nicknamed ‘Budda’ which literally means old man as he is above 60 years of age. The daring dacoity and shootout incident where an innocent bystander was killed occurred on Aug. 23 evening and all but one accused have been arrested.

Budda is above 60 and he pocketed most of the gold including ornaments like gold chains, necklaces, bracelets and heavy rings. He has been captured filling the gold into his shirt and trouser pockets. Though the other seven too stole gold, they could not take away as much as this old man had taken. While eight accused shared 1 kg of gold, this man took away 1 kg.

Another accused in the case is Mahendra, the mastermind, who owns Balaji Bankers and Jewellers near Mahadevapura Railway Gate. He invited the gangsters, some of them who are contract killers, to loot the Vidyaranyapuram shop. From conceptualising, planning and execution of the crime, Mahendra played a crucial role and he has been put behind bars now.

After the chase that involved Police teams travelling to eight States, the Police have zeroed-in on Budda’s location to be in Mumbai. He has been the resident of the Mumbai Metropolitan since many years and according to his tower location, he is holed up in a thickly populated area and searching for him is proving a daunting task to the Police.

Has 40 years of criminal history

A Police team has left for Mumbai on Aug. 25 itself in search of this elderly criminal and are closely coordinating with Mumbai Police to nab him. Mumbai Police have told Mysuru Police that Budda (not his real name) took to crime at a young age of 20 and he is an expert in stealing gold ornaments and disposing of them without even a trace.

He has been jailed more than nine times and he has diligently continued his criminal activities even after coming out on bail and after completing his jail term. He has over 40 years of experience in the loots and dacoities.

Excluding the mastermind Mahendra, all the other accused persons are Budda’s friends who became close in the jails.

Inside the jail barracks, they shared information, modus operandi and other details with each other and were planning a major loot after they came out of the prison. Mahendra was facing severe losses in his gold business and had borrowed loans to the tune of lakhs of rupees.

He knew that Amruth Gold and Silver Palace was doing good business and planned the heist. Along with mounting losses, business rivalry too played an important role in the planning and execution of the dacoity. Mahendra came into contact with the criminals and contract killers in jail where he stayed for some months in a cheating case.

After gaining their trust, he got their contact numbers and entered into an agreement with them to zero-in on a gold store and divide the loot among them. He planned the dacoity and hoped to clear at least some of his debts.

After the eight dacoits including Mahendra were arrested, the Police managed to recover 1 kg of gold but the major part of the loot still remains with Budda, who is still at large.