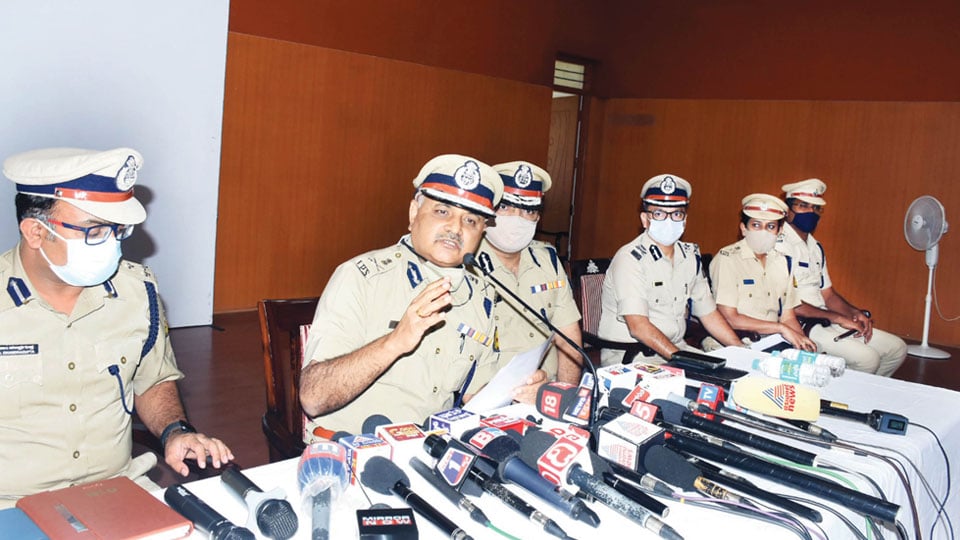 Another absconding; One among accused is a minor

Mysore/Mysuru: In a major breakthrough, the city Police have arrested five persons in connection with the gang rape incident that occurred at Lalithadripura at the foot of Chamundi Hill on the night of Aug. 24. One among the accused is a minor and all of them were arrested at the Textile City of Tirupur in Tamil Nadu and have been brought to Mysuru.

In all, there are six accused in the case and one among them is absconding, said Karnataka Director General and Inspector General of Police (DG&IGP) Praveen Sood, addressing a press conference at the Office of the Superintendent of Police (SP) in the city this noon. “The age of one accused is 17 and it needs to be confirmed and further procedures will be undertaken as per the Supreme Court guidelines and the guidelines of Juvenile Justice Board,” he said.

The incident took place around 8 pm in the Thippayyanakere region in Lalithadripura. The girl (victim) from outside Karnataka was a MBA student in Mysuru and she was accompanied by a male friend when the incident occurred.

“This is for the first time I am addressing back-to-back press conferences. Yesterday I had spoken to you about the teams that cracked the Vidyaranyapuram jewellery store gold heist and today here I am before you to reveal the arrest of gang rape accused,” Sood told the media and announced a reward of Rs. 5 lakh to the team that nailed the accused.

No statement from the victim

“The youngsters gang raped the girl student and also severely assaulted her male friend. The accused even filmed the heinous crime and threatened to make the video clips viral if they were not paid Rs. 3 lakh and they negotiated a deal with the girl’s parents too after forcing the girl to call her parents in Maharashtra. Our officers tracked down the accused with the help of technical and electronic evidence,” Sood said.

“We did not get even a single line of statement from the victim and we began our investigation based on the sketchy, inconsistent and also incomplete version from the rape victim’s male friend who also is in a state of trauma. The accused have studied till eighth standard and have dropped out later,” the DG&IGP said.

Not disclosing their age and identities due to Supreme Court guidelines on the cases that are under investigation, DG&IGP Praveen Sood said, “All the accused hailed from Tamil Nadu and used to come to Mysuru frequently to do odd jobs at APMC Bandipalya and other areas as they specialise in loading and unloading. After work they used to get drunk and indulge in crime.”

“Our priority is to get stringent punishment to the criminals and if necessary we will appoint a Special Public Prosecutor in a Fast Track Court to try the accused. All the due process including evidence and samples from the crime scene, lab tests, DNA samples and the rest have been diligently procured and we have a strong case,” Sood added.

On the rape survivor, the DG&IGP said that the Police are in constant touch with her. “Though no statement has come forward from her, we are hopeful that she will help us get the criminals punished,” he said. Sources told Star of Mysore that the victim has been discharged from the hospital against medical advice.

“The girl was under a state of shock. Her parents did not allow the Police to record her statements and got her discharged forcefully against doctors’ advice. She was taken to Bengaluru and then shifted to Maharashtra in a helicopter,” sources added.

4 COMMENTS ON THIS POST To “Breakthrough in gang rape incident at Chamundi Foothill: Five arrested in TN”