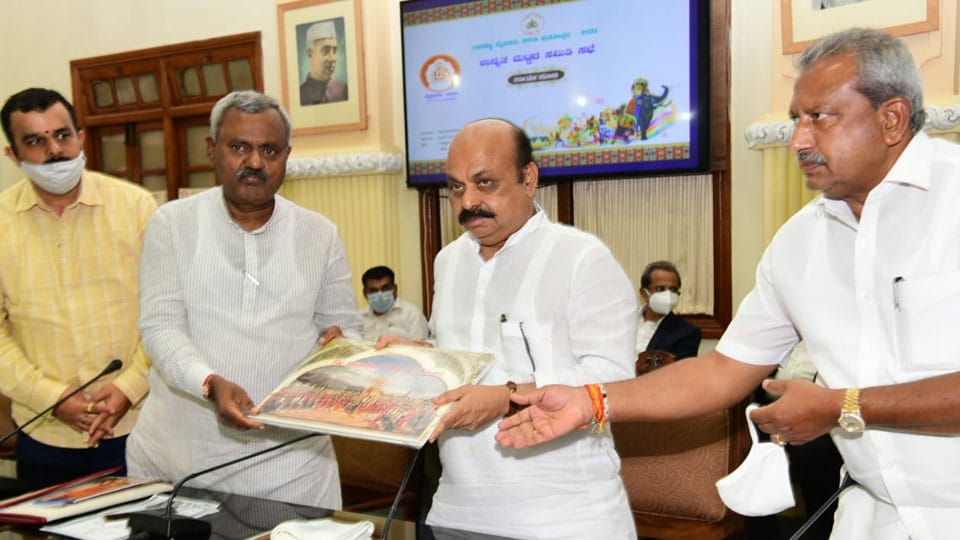 Scaled-down Dasara this year too

Bengaluru: Bringing curtains down on the uncertainty of the nature of Dasara this year amidst the COVID-19 crisis, the State Government on Friday said that the world famous Dasara festival (Oct.7-15), popularly known as ‘Naada Habba’, will be celebrated in a simple yet traditional manner in the wake of the pandemic.

Chief Minister Basavaraj Bommai, who presided over a meeting of High-level Committee at the Banquet Hall of Vidhana Soudha here yesterday, said the Committee unanimously resolved to celebrate the festival in a simple and symbolic manner.

Pointing out that Rs.6 crore will be released for holding the festivities in Mysuru, Srirangapatna and Chamarajanagar, Bommai said that all traditional events including the inauguration of ‘Naada Habba’ atop Chamundi Hill, will be held in accordance with Government SOPs and adherence to COVID appropriate behaviour.

Noting that Rs.8 crore was released towards dues of last year’s Dasara events, Bommai said that the State Government, in order to give a big push to tourism, has planned a tourism circuit covering Mysuru, Hassan and Chamarajanagar districts.

Minister for Energy, Kannada and Culture Sunil Kumar said that illumination would be made in Mysuru during the festival. Pointing out that it has been planned to illuminate a total of 45-km length of streets and Circles, he said that last time around 30-km roads were illuminated.

The Committee empowered CM Bommai to decide on the dignitary for the inauguration of the event. As local small businesses, including hotels and other commercial activities have been hugely affected by the pandemic, the meeting discussed ways and means to revive local business.