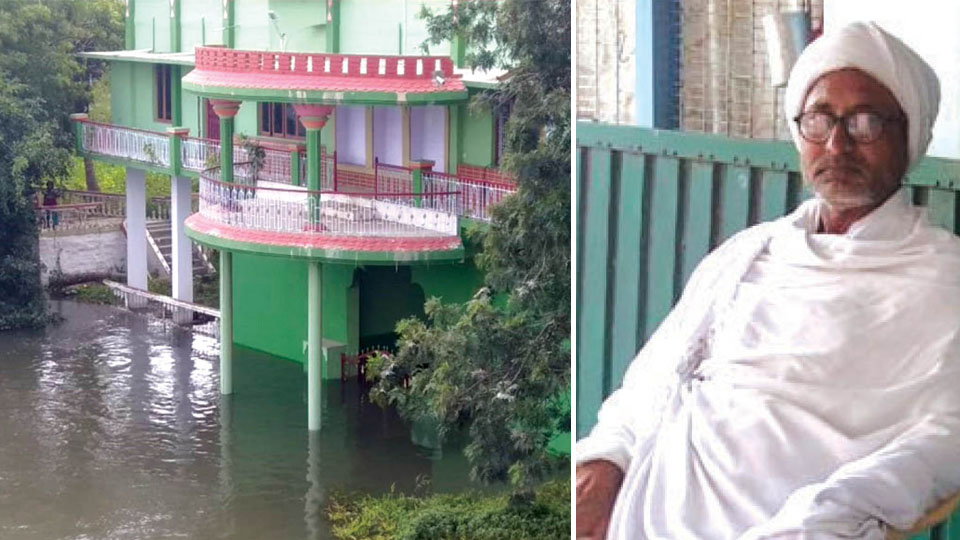 Gautama Ashrama in  Mandya flooded Swamiji refuses to move out

Mandya: The well-known Gautama Ashrama at Doddegowdanakoppal in Mandya taluk has been inundated as a large volume of water is being let out from Krishna Raja Sagar (KRS) Dam into River Cauvery. Six people, including Ashrama head Gajanana Swamiji, are in the Ashrama.

As more than 60,000 cusecs water is being released from the Dam, the connectivity to the Ashrama has been lost. Those inside the Ashrama are Mataji, Mahindra hailing from Bihar, locals Rathnamma and Bhagyamma and Chetan of Kennalu village in Pandavapura taluk.

Realising that the Ashrama is under inundation threat, the Mandya District Administration contacted Gajanana Swamiji and asked him and the devotees to move to a safer place. But Gajanana Swamiji refused to move out.

Mandya Deputy Commissioner N. Manjushree also spoke to the Swamiji asking him to move out, but he refused and told them that they were far away from the water and have enough ration and supplies to hold on.

The authorities said that water has covered the Ashram and access has been blocked. But the building will be in danger if more water is released, they said.

The district authorities are in touch with Gajanana Swamiji. Tahsildar Nagesh said, “A team is ready with boats and will be pressed into service, if need be.”