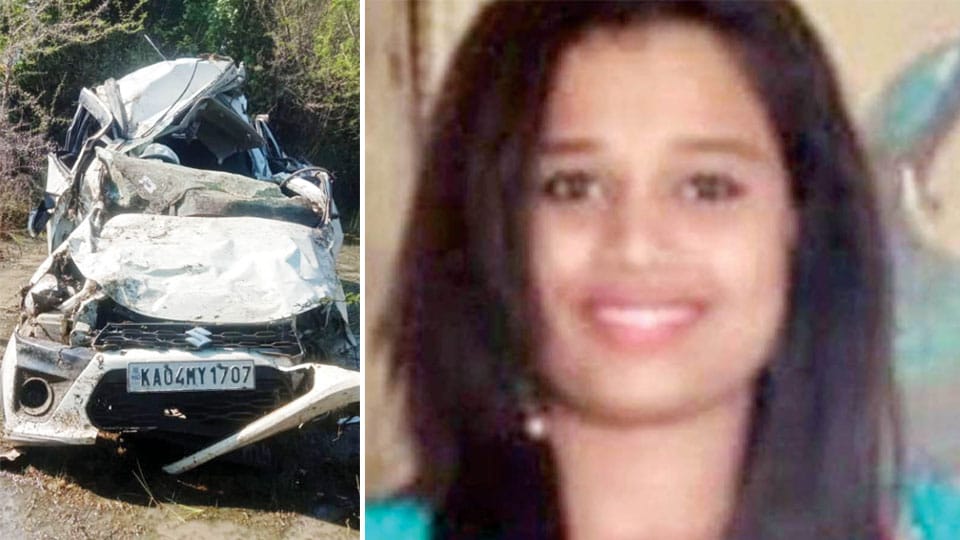 Nagamangala: In a tragic accident, a 23-year-old girl, who was coming to Mysuru from Bengaluru to attend the birthday party of a close friend, was killed when her speeding car toppled near Konanuru Gate at Nagamangala yesterday.

According to eyewitnesses and the Police, Tanushree, who was alone driving the car, lost control when she was trying to catch up with her friends who had just overtaken her in another car. The Police said that a group of friends had left from Bengaluru for Mysuru in two cars and Tanushree was driving one of the cars, a Swift (KA-04-MY-1707), alone while others sat in another car.

Both vehicles took the Kunigal route from Bengaluru to reach Bellur Cross and Nagamangala via the Konanuru Gate.

The car with more people was following Tanushree’s car as she was driving alone but at one point they overtook her. Tanushree, to catch with them, increased her speed which led to her losing control of her car near the Konanuru Gate.

Eyewitnesses said that the vehicle veered off the road and flipped over thrice before landing. The vehicle landed in a paddy field about 15 ft away from the road. Villagers and passers-by rushed to the spot.

Her friends, who had gone way ahead, soon noticed that Tanushree was not behind them and called her cellphone.  Instead of Tanushree, her phone was answered by a local villager who informed them about the accident. They returned to Konanuru Gate only to learn that their friend had died on the spot.

Tanushree’s body was shifted to Nagamangala Government Hospital and Nagamangala Rural Police have registered a case.