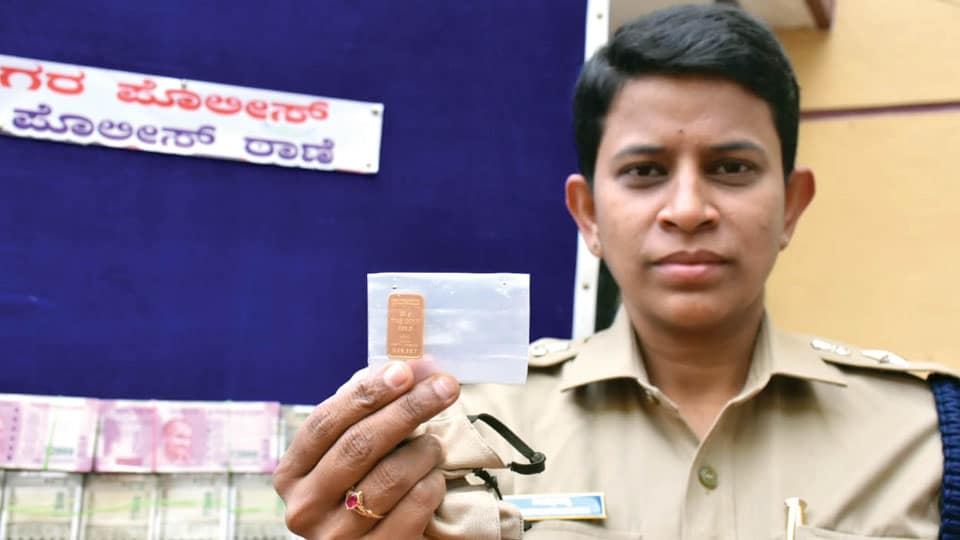 Mysore/Mysuru: The City Police have cracked two cases of cheating where gullible people were targeted by inter-State gangs, who cheat by offering to sell gold at low prices. Seven persons have been arrested and cash amounting to Rs. 15 lakh has been seized along with a 20 gram gold biscuit, two cars, one bike and five mobile phones.

On interrogation, the accused told the Police that they were habituated to luxurious life and needed money for the same. Of the Rs. 28.50 lakh cash that was obtained from cheating, they had spent Rs. 13.5 lakh in a matter of days.

The first case was reported from Narasimharaja Police Station limits a month back when one Yusuf introduced himself to Abdul Samad, a resident of S.S. Nagar, as a gold merchant and promised Samad that he would get gold in cheap prices. Trusting Yusuf, Abdul Samad gave Rs. 5 lakh as advance.

While convincing Samad, Yusuf had produced a gold biscuit and promised the former that the gold would be pure and no cheating was involved here. However, after Samad paid the advance, Yusuf vanished from the scene and Samad lodged a Police complaint.

In the second case, Shahanth Aslam was cheated by Yusuf of Rs. 23.50 lakh and a case was registered at V.V. Puram Police Station. Yusuf had told Aslam that he could sell gold in cheap price as he was a dealer from Reserve Bank of India (RBI). Yusuf boasted of top-level connections with the RBI officers and get gold at concession rates.

Shahanth Aslam was bowled over by Yusuf’s claims and agreed to pay Rs. 23.50 lakh. When Aslam brought the cash to a bank on Temple Road near V.V. Puram Police Station, Yusuf took the cash bag inside the bank to deposit and then vanished from there. He managed to send Shahanth Aslam out of the bank while he escaped.

The arrests were made on Jan. 11 by a Special Police Team constituted by DCP (Crime and Traffic) M.S. Geetha Prasanna and N.R. Sub-Division ACP Shivashankar. The arrested have been identified as Mustafa alias Yusuf and Kunjiraman alias Ramji both residents of Thaliparamba of Kannur district in Kerala and Abdul Hakeem alias Mohammad, a resident of Madikeri in Kodagu district.

Initially, the Police arrested three persons and based on the information given by them, four more accused were arrested on Jan. 13. They have been identified as Mohammad Shafi from Hadoor of Kasaragod in Kerala, B.P. Gurucharan of Mahadevpet in Madikeri, K.A. Karthik of Kunjila village near Kakkabbe in Kodagu district and Sameeulla of Bannimantap in Mysuru. Cash worth Rs 15 lakh (Rs. 12.50 lakh from V.V. Puram Police case and Rs. 2.50 lakh from N.R. Police case), one 20 gram gold biscuit, two cars and one two-wheeler have been seized. Investigations revealed that Mustafa alias Yusuf and Mohammad Shafi had similar cheating cases on them in Kollam district in Kerala. N.R. Inspector Azaruddin, V.V. Puram Inspector Arun and team led the arrest operation.