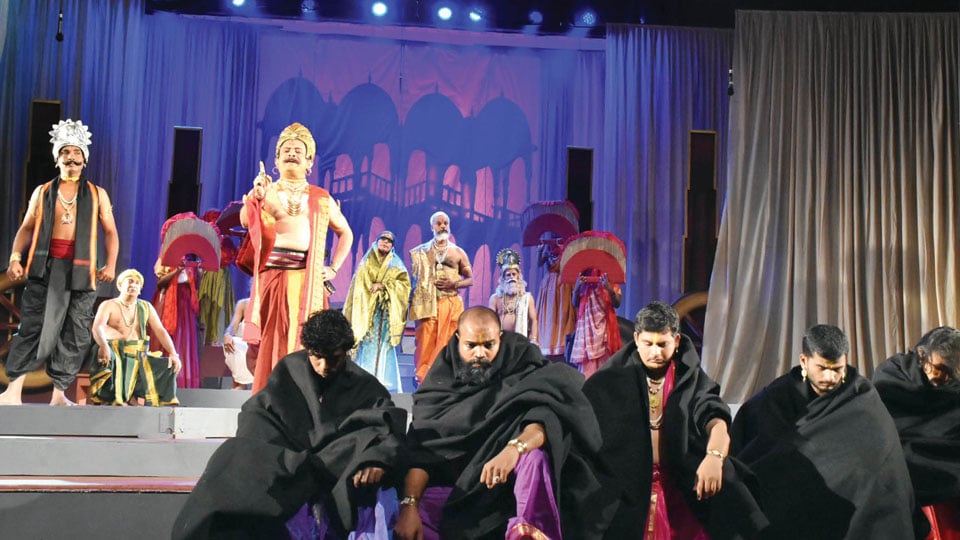 Good response to Parva on stage

Mysore/Mysuru: Novelist Dr. S.L. Bhyrappa’s novel ‘Parva’ which has been adapted into a play was staged for the second and third time at Kalamandira in city yesterday and the event got good response from theatre enthusiasts.

Today morning, Kalamandira campus was abuzz and a festive mood prevailed. Theatre lovers from Mandya, Kollegal, Chamarajanagar and other places had arrived at the venue and eagerly watched the play.

Yesterday’s show witnessed many theatre buffs from Bengaluru. Except for balcony, all the 821 seats were occupied and the audience was spellbound throughout.

During the second show of the play which was held yesterday, Kalamandira was almost full. Speaking to Star of Mysore this morning, Rangayana Director Addanda C. Cariappa said, “There are almost hundred plus characters in this play. We have had a huge challenge of managing all those characters with just 30 to 35 actors, which is certainly very demanding on their part. In fact, most of our actors have played multiple roles. We have really worked hard and put a lot of effort for this show.  Now, it seems that all our efforts have paid off.”