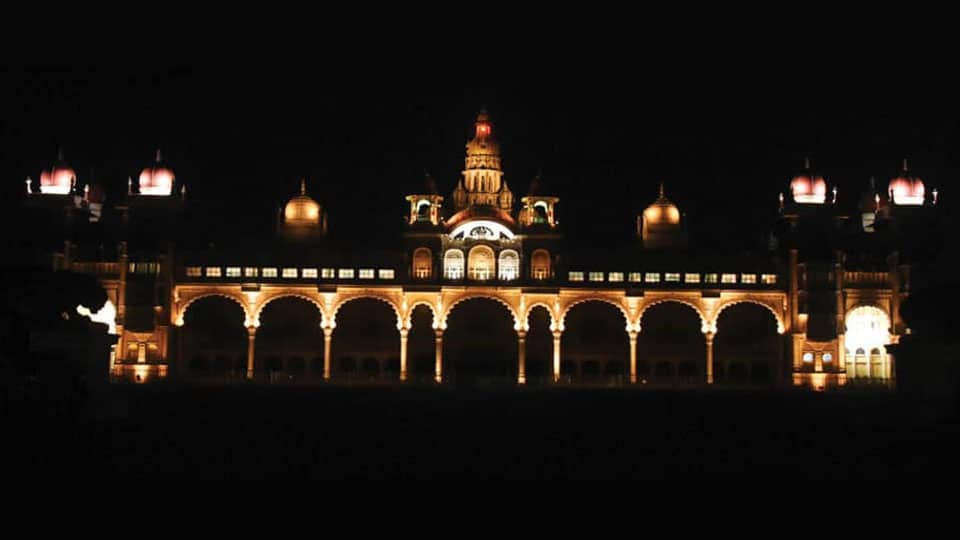 Mysore/Mysuru: Mysore Palace Board has decided to restrict the number of visitors to watch the Sound & Light show at Mysore Palace starting from tomorrow (Monday) to 250, following the rise in Corona positive cases.

“Only 250 chairs will be put in front of the Palace with a minimum distance of six feet between each. Every visitor will be subjected to mandatory COVID test at the main gate before entering the Palace arena,” said Mysore Palace Board Deputy Director T.S. Subramanya to SOM.

He said the Palace Board was aware of the circular issued by the State Government putting a cap on number of people attending marriage, birthdays, religious and political functions, and last rites. Accordingly, they have decided to allow only 250 persons to watch Sound and Light show which had been started after a gap of nearly six months due COVID-19 pandemic. Visitors will be allowed inside only from one gate that too after thermal screening and checking oxygen level. Any person found with fever or cough will not be allowed inside. The entire area will be cleaned thoroughly before and after the show which lasts for 45 minutes.

Subramanya said the show will be in Kannada on Monday, Tuesday and Wednesday; in English on Thursday and Friday and in both languages on Saturday and Sunday as there will be more tourists on the week-ends.

“We are keeping our fingers crossed for Sound & Light show which resumes from tomorrow. So far, there is no advance booking has been made for this show and tickets will be sold at the counter. I am hoping for a good beginning without any problems,” he added.