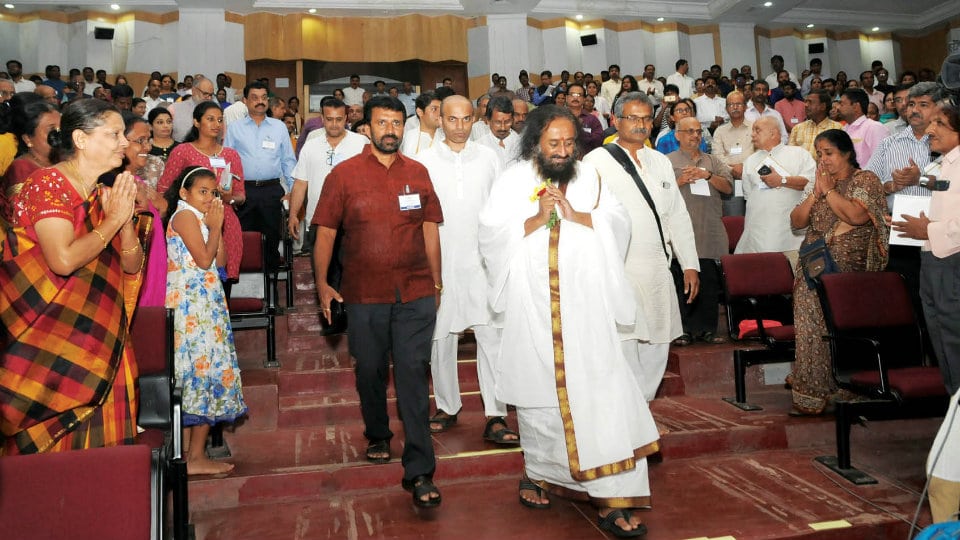 Mysuru:  “The Government alone cannot solve the problems of the farmers. Hence, Non-Governmental Organisations (NGOs) and others should join hands to solve them,” said Art of Living Founder Sri Ravishankar Guruji.

He was speaking at an interaction session on ‘Project Bharat’ idea with the farmers and women at the Art of Living Ashram on Lalithadripura Road and said that the Government by waiving of farmers’ loans could lessen the burden only to a certain extent. However, if the NGOs and others come together then a lot more can be done, he added.

The health of people in villages who are falling ill frequently and eradication of poverty, unemployment problem in rural areas must be addressed first, he said and added that the youth must be given training to be self-employed and the agriculture experts must share their knowledge with the farmers, besides cultural team must be encouraged in every village. ‘Project  Bharat’ is involved in such endeavours and many programmes are being chalked out, he said.

History shows that before India gained independence the foreigners looted the country. Likewise, today we are using foreign produced goods right from chips to toothpaste. They are mixing our potatoes, salt, oil and other ingredients and selling our own food to us. As a result our youth have no jobs. Hence, even if there is a less profit we should produce our own goods, he said.

A vicious atmosphere is being created in the villages with the brothers fighting among themselves for properties and land. The villages have remained economically backward.

The produce that the farmers grow with sweat and blood do not fetch reasonable prices. Added to this they do not have proper marketing skills. These are the problems that needs to be addressed, said Sri Ravishankar.

Hundreds of farmers and women from Mysuru and Mandya districts participated in the interaction.