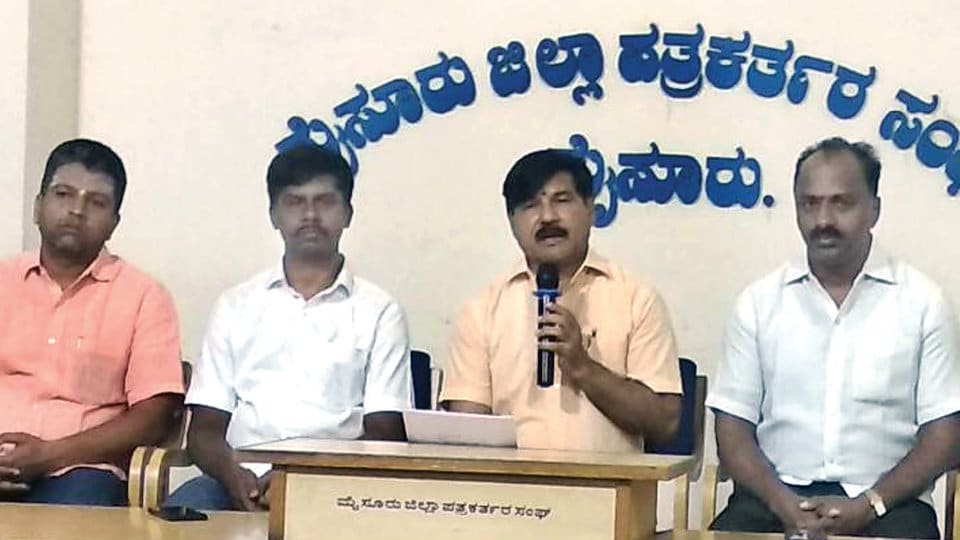 Mysuru: Even as residents of Mysuru Urban Development Authority (MUDA) Layouts in Kurubarahalli Survey No.4 and Alanahalli Survey No.41 have planned a ‘Bengaluru Chalo’ on Feb.11 to meet officials and Ministers concerned to discuss the inordinate delay in deleting ‘B-Kharab’  classification of the said lands, Krishnaraja MLA S.A. Ramdas has announced that the Government Order to delete the B-Kharab classification will be issued a week after Feb. 25.

Addressing a press conference at Pathrakarthara Bhavan in city this morning, Ramdas said that the State Advocate General has considered the legal aspects of the case in the light of many petitions pending in Karnataka High Court and has conveyed his opinion to the State Government.

“The Advocate General’s opinion is favourable to the residents of the layouts and a Government Order will be issued within one week after Feb. 25,” the MLA said.

However, BJP National Council Member and former Karnataka Exhibition Authority Chairman B.P. Manjunath, who is spearheading the cause of residents, said that the Advocate General had already given his favourable opinion to the previous Government led by Siddharamaiah and as a result, the Siddharamaiah Government had taken a Cabinet decision to leave out Siddarthanagar and Alanahalli, K.C. Nagar, J.C. Nagar and Income Tax Layouts from ‘B-Kharab’ classification.

The Chief Minister’s Office (CMO), vide its letter No. CM/52430/REP-4EM/2018 dated Sept. 17, 2018, had also directed the MUDA Commissioner to take further action in respect of the Cabinet decision, Manjunath said.

Manjunath said that Ramdas had earlier at a meeting held at Sri Ganapathi Temple in Siddarthanagar had said the same thing without any result. Hence, now let us wait.