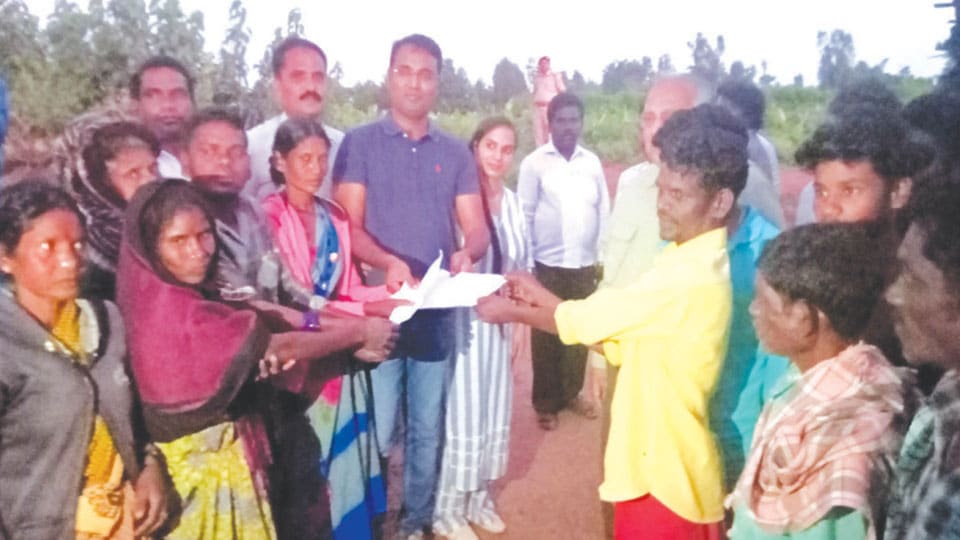 Hanagodu: Karnataka State Wildlife Board Member and retired ADGP K.S.N. Chikkerur has said that there is no provision for tribals who have been rehabilitated earlier to live again in the forests.

He was speaking at Shettahalli-Lakkapattana Rehabilitation Centre in Hanagodu hobli recently after listening to the grievances of the residents.

“All of you are beneficiaries of Government’s Nagarahole Forest Tribals Rehabilitation Programme and once you are rehabilitated under a Government programme, you cannot go back to forest again and live there. But the Government is prepared to solve your problems. So, form a Forest Rights Committee in your Rehab Centres and inform the Government about your problems through the Committee,” he advised.

Mysuru District Superintendent of Police (SP) R. Chethan, who spoke on the occasion, opined that instead of taking law into their hands the tribals should report their problems with the officials concerned who will bring them to the notice of the DC. A meeting will be held soon to solve the problems of tribals, he said and urged them to compulsorily send their children to schools.

Chowdamma, an inmate of Rehabilitation Centre, said that 40 families of H.D. Kote taluk’s Bogapura hamlet in Nagarahole were rehabilitated at Shettahalli-Lakkapattana Rehab Centre with the help of Forest Department and voluntary organisations. “But even basic facilities are not provided here by the Government. Because of this, we wanted to go back to forests on January 15 and live there. But Forest and Police officials have brought us back to the Rehab Centre. If the Government doesn’t provide basic facilities and solve our problems, we will go back to forests,” she added.

READ ALSO  Safaris, resorts in Bandipur, Nagarahole out of bounds

Rehab Centre leaders later submitted a memorandum to the SP seeking basic facilities. The SP assured them that he will forward them to the DC and hold a meeting in their Rehab Centre at the earliest.