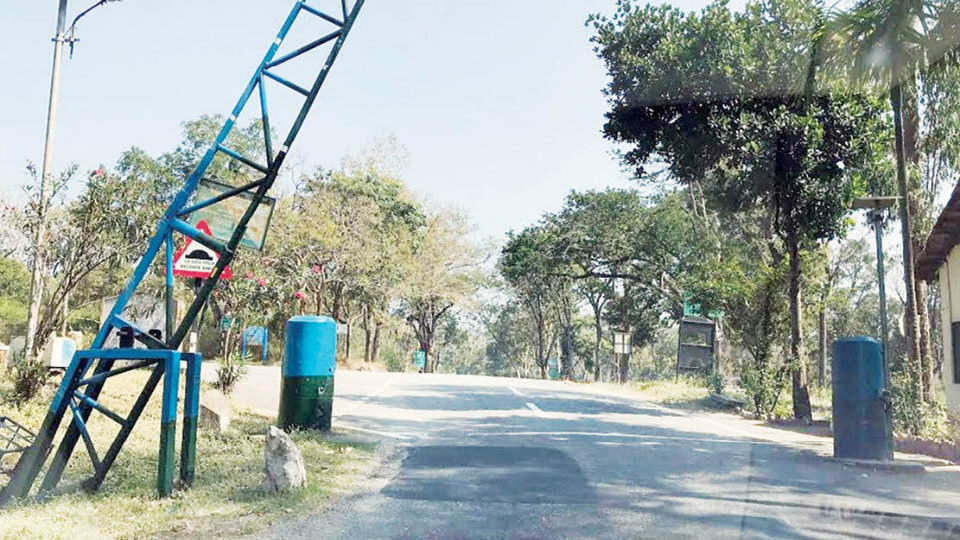 Mysuru: The Kallahalla Range of Nagarahole National Park has been handed over by the Centre to the Tiger Zone under the Nagarahole Tiger Reserve. This means, the Anechowkur Gate that connects Mysuru and Bengaluru to South Kodagu will come under the Protected Zone where night traffic will be banned from 6 pm to 6 am.

There is a night traffic ban inside the Nagarahole National Park and only restricted number of vehicles is allowed between 6 pm to 6 am. The inclusion of Kallahalla Range into the Tiger Zone has caused apprehension among regular travellers on this crucial road.

The orders passed by the Centre a fortnight back include the Anechowkur Gate in the Tiger Reserve.

Speaking to SOM this morning, C.K. Bopanna, President of Social Justice Committee of Kodagu Zilla Panchayat, said that the closure of the Anechowkur Gate will become inevitable to the Forest Department.

“Though there is no definite order as of now in this regard, in the course of time, the Department might enforce the rule which is in force in the other roads that pass through Nagarahole Tiger Reserve. Even this rule exists on the Bandipur National Park where the road is closed from 9 pm to 6 am,” Bopanna said.

Following a High Court directive to lay speed-breakers at an interval of 500 metres for the 11-km stretch on the Mysuru-Virajpet Road (State Highway 90) near Mathigodu elephant camp passing through Nagarahole Tiger Reserve, the Public Works Department has already laid over 22 road humps.

The High Court passed this order in March this year after hearing a Public Interest Litigation (PIL) petition, seeking directions to the Forest and PWD to take immediate steps to ban night traffic between 6 pm and 6 am on the State Highway.

The PIL submitted that vehicles moving on the road were a threat to elephants. The petitioners sought direction to the authorities, to provide for speed-breakers on the Highway, to keep a check on the speed of vehicles.

Reacting on the issue, Nagarahole Chief Conservator of Forests Narayanaswamy denied that there was a proposal to ban night traffic on the Anechowkur stretch. “It is true that the Kallahalla Range was included in the Tiger Zone. However, as of now, there is no proposal to ban the night traffic. This is the crucial connecting road between Mysuru and Kodagu and as the Kutta Road is closed between 6 pm and 6 am, this road will be kept open. Also, more than 22 road humps have been laid on the stretch to slow down the vehicles,” he said.

If at all the Forest Department implements the night ban, vehicles moving to and fro South Kodagu and Mysuru must take the Gonikoppal, Pollibetta, Hundi, Holamaala, Maldare, Periyapatna road, travelling an additional distance of 16 kilometres.