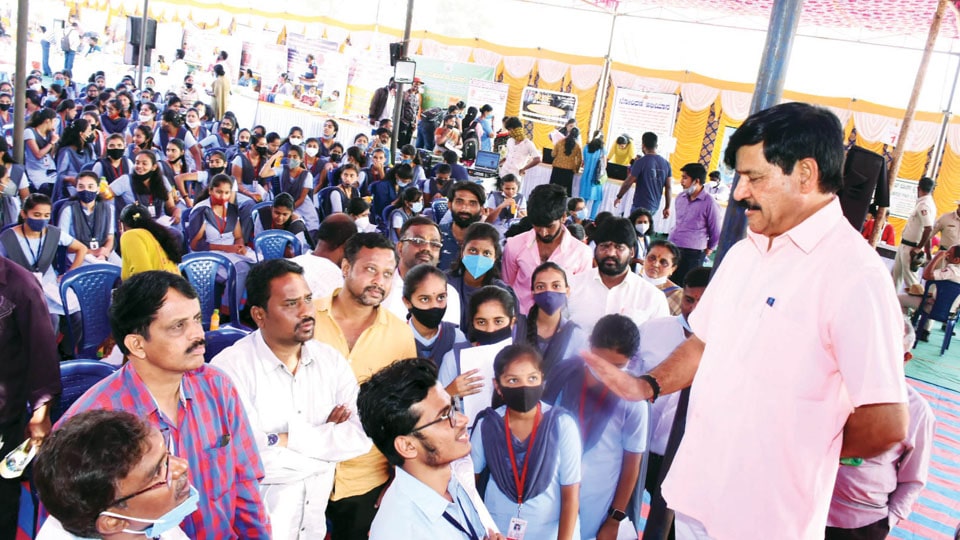 Mysore/Mysuru: On the second day of his ambitious 5-day Employment Generation Mela at different venues in the city, MLA S.A. Ramdas interacted with students and job aspirants at Vokkaligara Sangha Samudaya Bhavan in Vidyaranyapuram yesterday.

Speaking on the occasion, Ramdas said that the mela has provided an opportunity for women SHGs to market their products. Promising that he would strive for tax exemption for these products, Ramdas said that several students have registered their name for employment in companies.

Pointing out that such students will be imparted skill development training, he said that the Government will be urged for coming up with a plan for imparting skill training even to the uneducated or less educated sections.

Contending that the Mela also provides an opportunity for students to earn while they learn, he said that the registered students will be provided an opportunity to work for 2 hours a day in private  companies, for which efforts will be made to get stipend from the Government.

Several companies gave some vital information on self-employment opportunities for the visitors.

Meanwhile, the vaccination drive for teens in the age group of 15 to 18 years continued on the second day too, as hundreds of students from different schools of K.R. Constituency, who were brought to the venue in school vans and other vehicles, received jabs.

Higher Education Minister Dr. C.N. Ashwathnarayan, who was supposed to take part in the event, failed to attend, much to the disappointment of scores of BJP workers who waited for him for a couple of hours.

With the Government announcing week-end curfews (from Friday night 10 pm till 5 am on Monday morning) and issuing a fresh set of guidelines in the wake of exponentially rising COVID cases, the Employment Generation Mela organiser MLA S.A. Ramdas has announced some changes in the venue and date.

According to a press release issued by the MLA’s Office yesterday, the Mela which was supposed to take place at Srirampura’s Bhramarambha Kalyana Mantapa on Jan.8, the last day of the 5-day Mela,  has been advanced by a day with a change in venue.

Accordingly, the Jan.8 Mela will now take place a day earlier, that is on Jan.7 at Samrat Kalyana Mantapa on Udayaravi Road in Kuvempunagar, which is also the fixed venue for Jan. 7 Mela.

There will be no Mela as such on Jan. 8 due to week-end curfew, the release said.