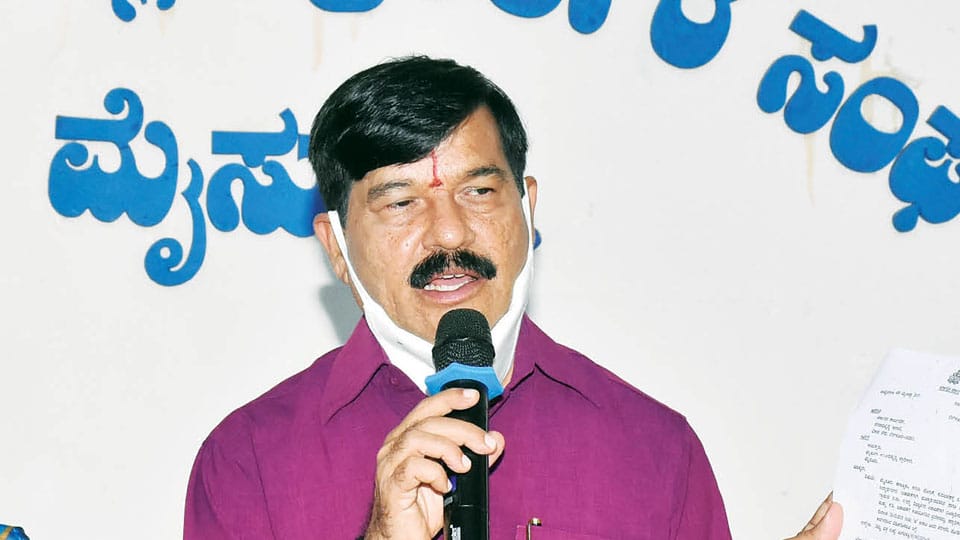 Mysore/Mysuru: While criticism is heaped on the BJP Government for allowing the demolition of centuries-old Huchhagani Adishakti Mahadevamma Temple in Nanjangud and the Government representatives actively countering the attack blaming the fiasco on the official machinery, party MLA S.A. Ramdas has decided to move a Private Member’s Bill in the Assembly to enact the ‘Karnataka Regularisation of Unauthorisedly Constructed Hindu Temples Act, 2021.’

The BJP MLA will move the Bill on Sept. 23. Speaking to reporters at a private hotel in the city yesterday, Ramdas said that the aim of the Bill is to regularise unauthorised temples. “I have already brought this to the notice of Chief Minister Basavaraj Bommai and the Bill will be taken up for discussion on Sept. 23. I will request Congress members, including Opposition Leader Siddharamaiah and D.K. Shivakumar and JD(S) members H.D. Kumaraswamy and H.D. Revanna to support the Bill,” he said.

Stating that the Bill has been planned to harmonise social relationships and religious feelings of people, Ramdas said, “The absence of a law to regularise Hindu temples has resulted in demolition of a few. In other States, Temples are protected from demolition through a separate law or rule.”

“Temples are cultural centres and there is a need to codify such Temples and their properties and regularise them. This Bill consists of 10 major sections, including constituting a competent authority in each taluk to receive applications for regularisation of unauthorised Temples, consider all records and recommend further action,” he said.

The Bill allowed shifting of those Temples which cannot be regularised or cause grave inconvenience to the public. “The Private Member’s Bill can be passed in the Assembly or can be converted into a Government Bill and the Government can get it enacted after discussing it in the Assembly — a decision which will have to be taken by the CM. I will withdraw the Bill if the Govt. decides to come out with a new Act,” he explained.