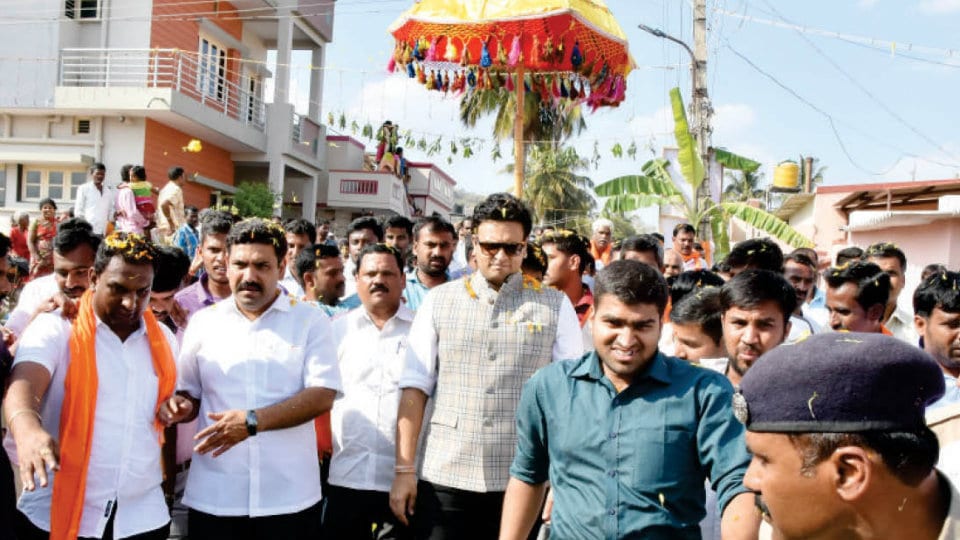 Mysuru/Mysore: The historical Lalithadripura village at the foot of Chamundi Hill celebrated its centenary in a grand way last evening. The well-planned village was established by Nalwadi Krishnaraja Wadiyar in 1920.

The entire village wore a festive look and villagers, women and children were dressed in colourful attire to mark the occasion. Every corner sported green leaf buntings and festoons. A giant portrait of Nalwadi and banners sporting his photos were the main attraction. A big stage was set up near Basaveshwara Temple from where the centenary celebrations were inaugurated by scion of erstwhile Mysore royal family Yaduveer Krishnadatta Chamaraja Wadiyar.

Recalling Nalwadi’s contribution, Yaduveer said that the late king cared about his people and gave importance to minute details. Studying the living conditions of people living in far off villages, the ruler made provision to ensure that people live happily, he said.

Nalwadi’s focus was on the entire kingdom and even small villages were under his radar and provided all basic facilities to the villages including roads, water and schools. “Nalwadi has laid a foundation to a prosperous village and it is our duty to ensure that the history is handed over to the next generation. Of late, plastic and unhindered development of real estate has affected many villages and several of them have lost the earlier charm,” Yaduveer regretted.

“Karnataka has fertile black soil and we must cultivate and consume here. Traditional buildings must be saved at any cost and a building such as Devaraja Market that is a hub for farmers, traders and customers is a symbol of heritage,” he said, expressing fear that the Devaraja Market might make way for shopping malls.

The foundation stone for a Samudaya Bhavan was laid by BJP Yuva Morcha State General Secretary B.Y. Vijayendra who said that for the Mysore Maharajas, their people were important and it was ‘Praja Rajya’ where welfare of the masses was taken care of. “The Wadiyars strongly believed public service is divine service and practiced their   beliefs,” he said.

Extolling the Wadiyars, Chamundeshwari MLA G.T. Devegowda said that the driving force behind many institutions like Cheluvamba and K.R. Hospitals and welfare projects like Krishna Raja Sagar (KRS) Dam, Shivanasamudra Power Station and Bhadravathi Iron Ore Factory was the Wadiyars. This resulted in overall development of the kingdom and laid a firm foundation for Karnataka’s development, he added.