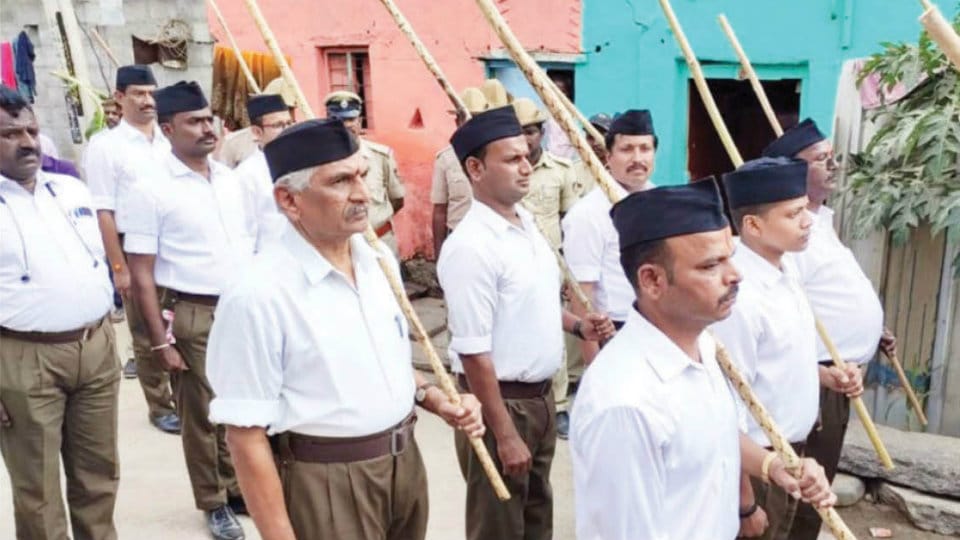 Muslims are happiest only in India, says RSS ideologue

Ramanagara: The Rashtriya Swayamsevak Sangh (RSS) conducted a route march (Pathsanchalan) in Ramanagara to express solidarity with the members of Sangh Parivar protesting against a project to install 114-feet tall Jesus Christ statue atop Kapalabetta in Harobele town in Kanakapura taluk of Ramanagara district.

Hindutva ideologue Kalladka Prabhakar Bhat, who had led a rally in Kanakapura last month against the project, also led yesterday’s route march and addressed a public meeting following the march. “The district’s name is Ramanagara but they have not nurtured the culture of Ram here. They have developed a strong culture of Ravana, which we pledge to dislodge,” Bhat told the gathering.

He said that the Sangh Parivar will never allow the Jesus statue to come up as he said it would foment religious conversion that is rampant in Harobele. “The so called Kapalabetta is of stones, which are revered as Lord Muneshwara by the Hindus. This hillock must be named as Muneshwara Betta,” he added.

Referring to the ongoing protests against the Citizenship (Amendment) Act (CAA), Bhat said that the law was brought in to protect the Hindu minority in Pakistan and Bangladesh and not to snatch away citizenship from any Indian including Muslims, Christians and other communities.

“Muslims are happiest only in India while they are persecuted even in Muslim countries. It is only the Hindu society that accepts all communities with open heart. It is unfortunate that some Muslims living in India say ‘Jai Pakistan’ after enjoying all facilities and Government schemes in India,” he said.

“Hindu groups are branded communal though this country has provided land, facilities and other benefits to all communities and provided space for their places of worship without interruption of any sort,” he said and added that all the 130 crore people in India are Hindus who have been converted into different religions by invaders and by those who promise the moon.

Shivakumar hits out at BJP, RSS

Meanwhile, senior Congress leader D.K. Shivakumar has hit out at the BJP and RSS for taking out a route march in Ramanagara against the controversial Jesus Christ statue.

“Just because the BJP won 25 seats in the Lok Sabha polls, Congress workers need not lose hope. If the Congress and JD(S) had worked out a better strategy, the BJP would not have won even 10 seats. We will correct our mistakes,” the former Congress Minister said.

After the Lok Sabha polls, the BJP has failed to do well in Assembly polls and has been losing power in many States. People are hitting the streets protesting against its policies such as CAA and NRC, he said.

Accusing the BJP and RSS of not being able to digest Congress’ victory in the Bengaluru Rural Lok Sabha segment in the 2019 LS polls, he said that the BJP is trying hard to make inroads into the constituency represented by his brother D.K. Suresh. “Let them take out route march, we don’t care,” he said.