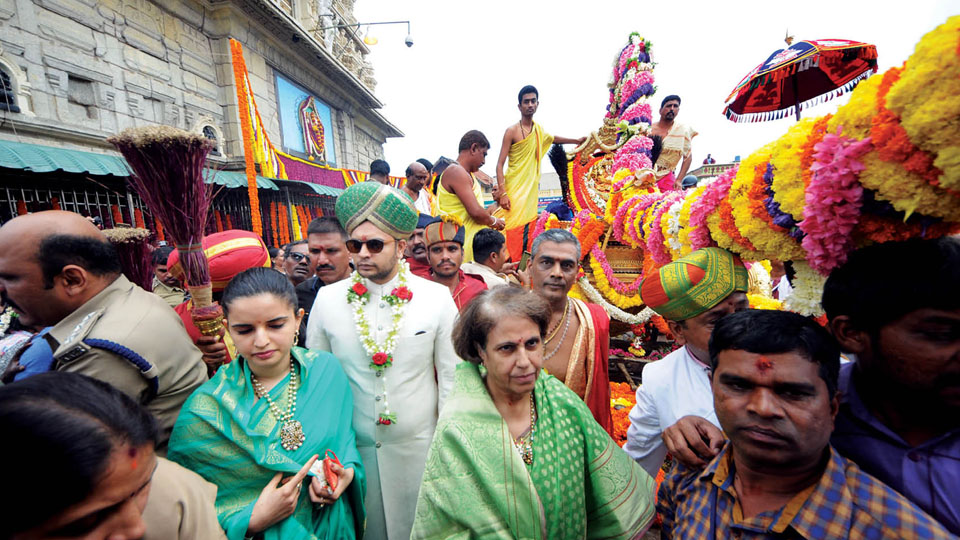 Mysuru: The Chamundeshwari Vardhanti Mahotsava atop Chamundi Hill on third Ashada Friday (Ashada Shukravara) saw an unusually high number of devotees queuing up in front of the temple since the small hours of this morning.

The temple doors were opened for devotees at about 7.15 am. The presiding deity Goddess Chamundeshwari was placed on  Chinnada Pallaki (Golden Chariot) at 10.25 am in the presence of Pramoda Devi Wadiyar, Yaduveer Krishnadatta Chamaraja Wadiyar and Trishika Kumari Wadiyar.

The Pallakki accompanied by Mangala Vadya and Palace Band, was taken around the temple, with thousands of devotees paying their obeisance to the utsavamurti by showering flowers. Mounted Police was deployed atop the temple as additional  security, considering high number of devotees thronging the temple for Chamundeshwari  Vardhanti.

PWD Minister H.D. Revanna, Forest Minister R. Shankar were among the devotees who paid their obeisance to the deity.

Next Friday (Aug. 10) is the last Ashada Shukravara this year.