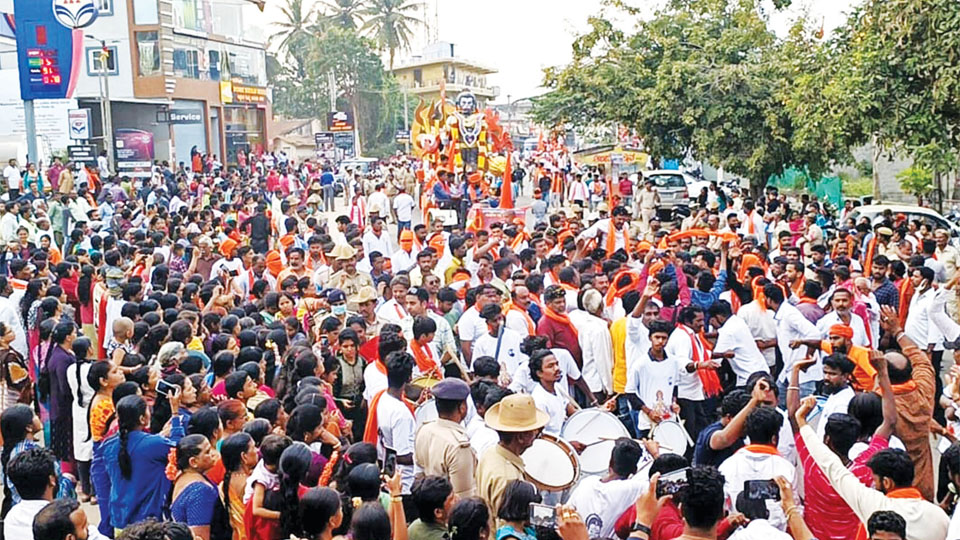 Hunsur: After a two-year gap due to COVID pandemic, Hanuma Jayanti was celebrated in a grand manner at Hunsur yesterday amid tight security.

As part of the celebration, a mega Shobha Yatre was taken out on the main thoroughfares of the town and the event passed off without any untoward incident.

The Shobha Yatre set off from Ranganatha Extension of the town at 11 am with Hunsur  MLA H.P. Manjunath, Gavadagere Gurulingadevara Mutt Seer Sri Nataraja Swamiji, Hunsur CMC Commissioner Manasa and other dignitaries offering flower petals to the idol of Lord Hanuman.

Thousands of devotees had gathered all along the Yatre  route, amidst chanting of slogans hailing Lord Hanuman. The Yatre was accompanied by a host of folk and cultural troupes which lent more colour to the mega event.

Hanumotsava Acharana Samiti, the organisers of the event, had made arrangements for distribution of water, cool drinks, custard milk, etc. to devotees.

Members of the Muslim community too lent their helping hand by distributing cool drinks at some points of the route. This year, there was no scope for political involvement as the Samiti itself had taken full responsibility of organising the event. However, all the political parties had extended their total support for the grand event, in which thousands of devotees took part.

The Police provided tight security and heightened vigil to ensure that the event passes off smoothly without any trouble or untoward incident.

SP R. Chethan and other top Cops supervised the security.